At a huge event in Shenzhen today, Xiaomi launched a lot of devices including three new smartphones, Mi Band 3, MIUI 10, MI VR and Mi TV 4. Among all these devices, the Xiaomi Mi 8 is the phone that we were waiting for. As expected, the device packs latest and greatest features that we expect to see inside a high-end flagship. Xiaomi is known for its aggressive pricing, and same is the case with the Mi 8 as it comes with an impressive price tag (at least in China). If the phone launches at the same price in the global market, it will destroy the competition (OnePlus 6, Honor 10 etc.). 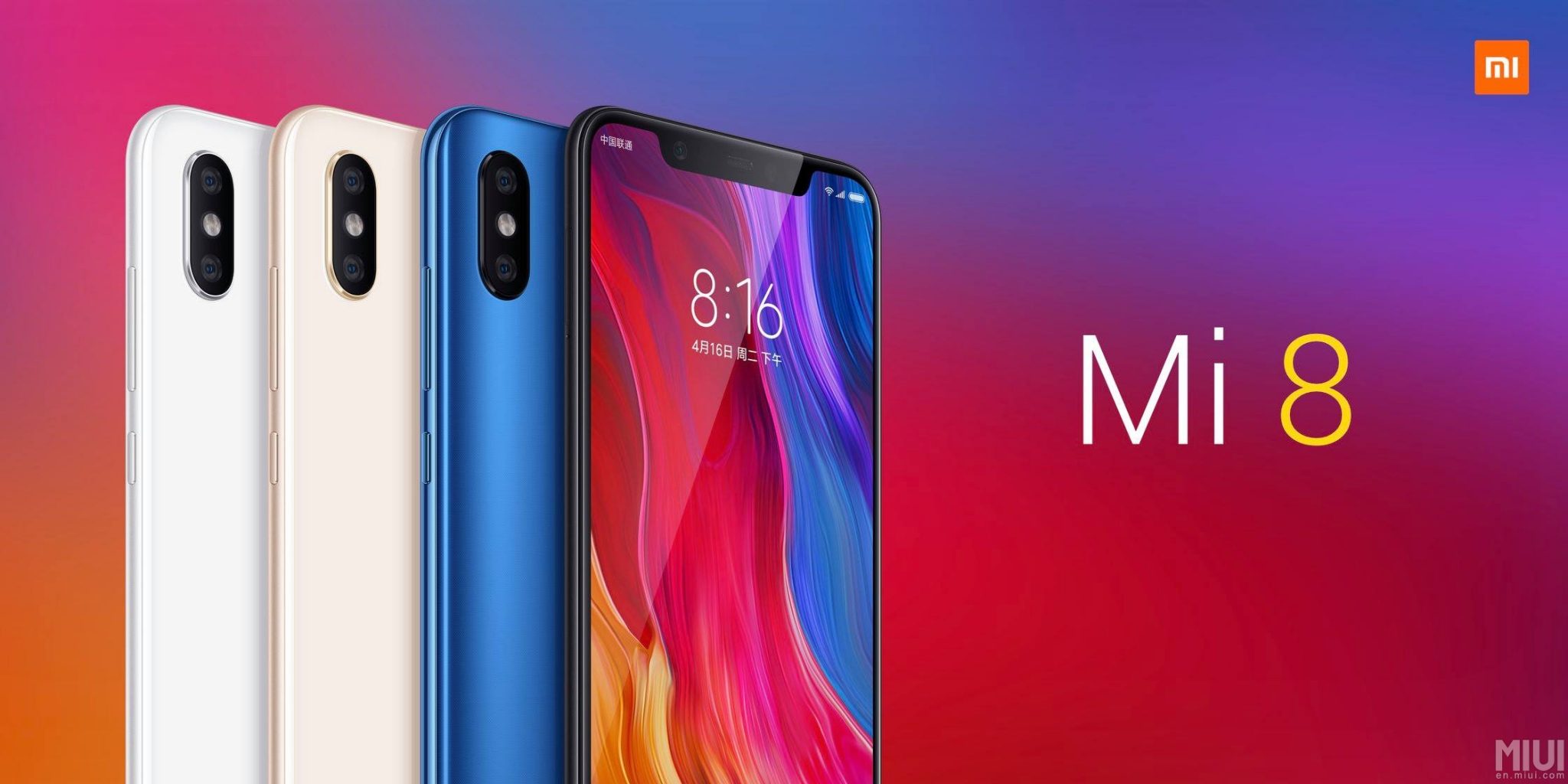 Talking about the design of the Xiaomi Mi 8, it is very similar to the Mi Mix 2S that launched this year. The main difference you are going to notice is the notch on the front which isn’t similar to the notch on every other Android smartphone launching these days. 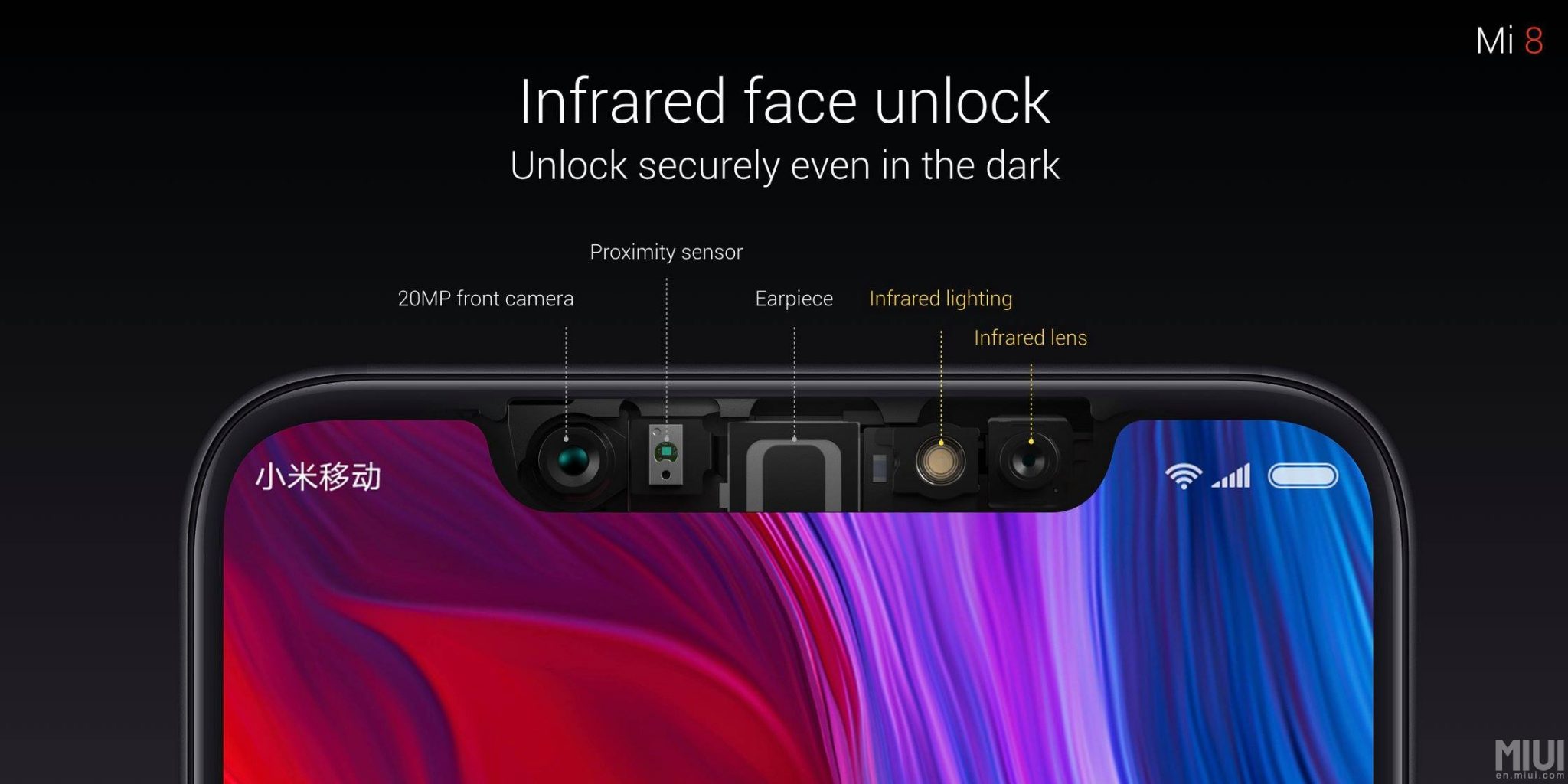 Just like the iPhone X, the notch on the Mi 8’s display features some sensors for an accurate Facial Recognition. Xiaomi is calling it the ‘Infrared Face Unlock’ which works even in complete darkness, thanks to the Infrared Lighting, Infrared Lens, and the 20MP front-facing camera.

We were expecting the in-display fingerprint scanner on the Xiaomi Mi 8, but the company added that feature on the Mi 8 Explorer Edition. The fingerprint scanner on the Mi 8 is placed on the rear. The 3.5mm headphone jack is not there, and it was expected as the company did the same when Mi 6 was announced last year. There is only one port, i.e., the USB Type-C port. 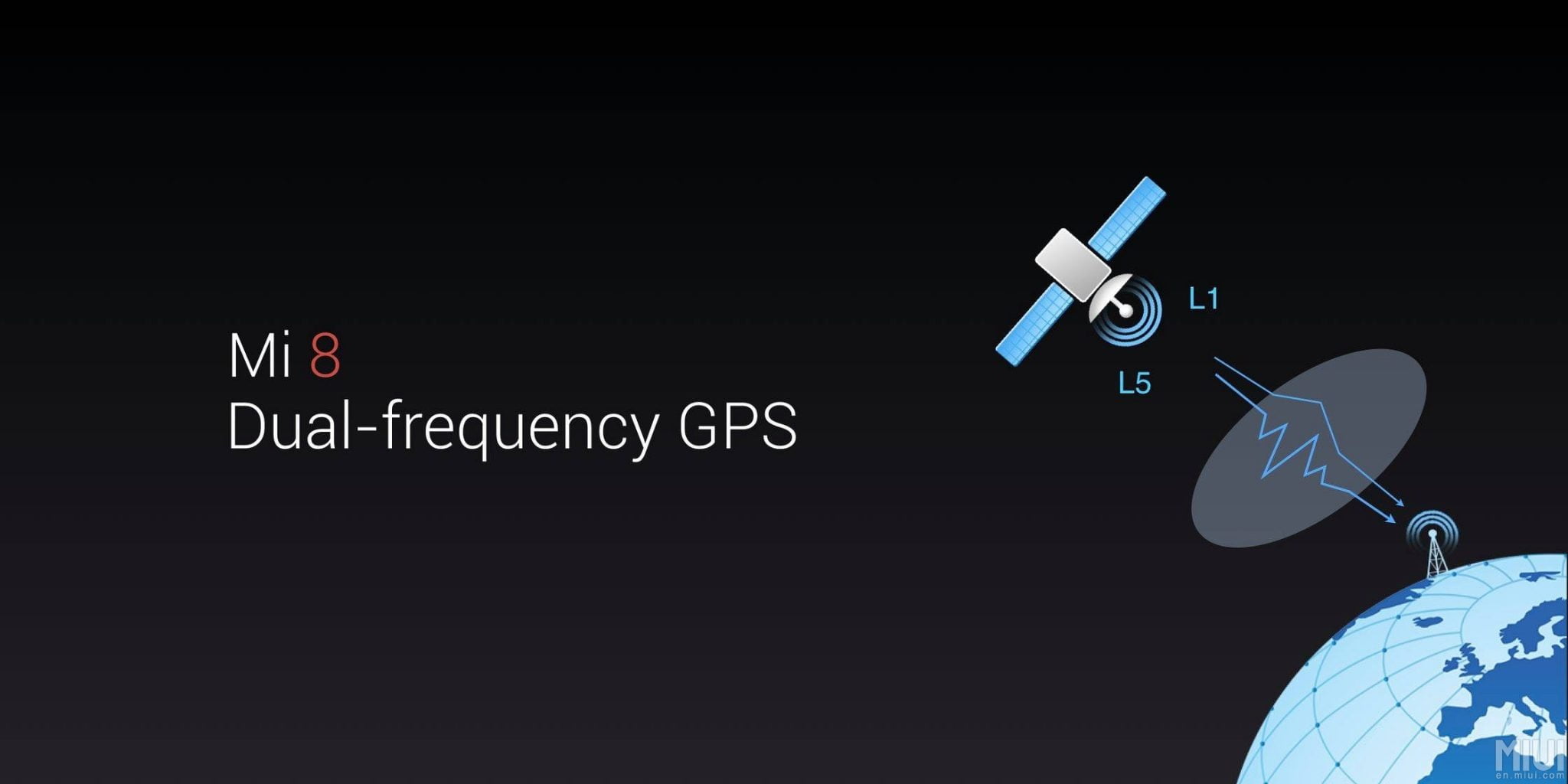 The Xiaomi Mi 8 features dual-frequency GPS for more precise navigation. The L1 Frequency, that that used in other smartphones binds with the L5 frequency that results in much better and accurate navigation. And did we mention that the Mi 8 is the first smartphone in the world to have this feature? 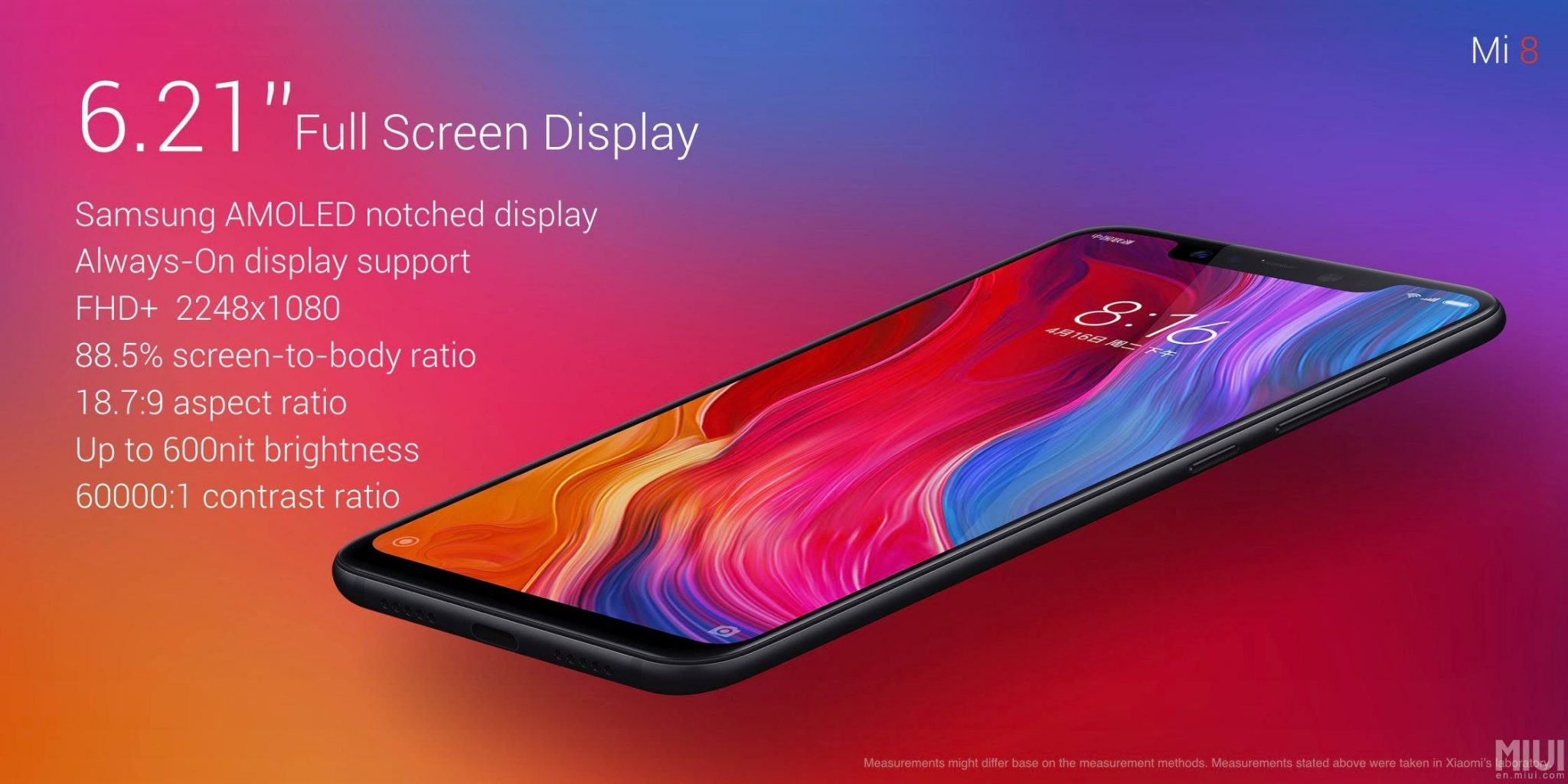 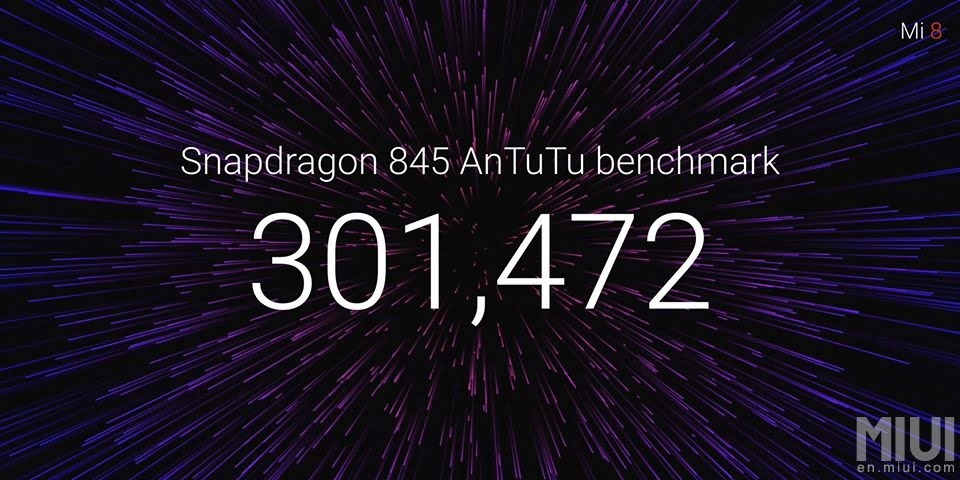 The Xiaomi Mi 8 is the smartphone with the highest AnTuTu score, scoring 300K+ on AnTuTu Benchmark. This is all due to the optimizations made by the company in the MIUI. Talking about MIUI, the phone still runs on MIUI 9 despite the fact that MIUI 10 was also announced today. There is 6GB RAM and 64/128/256GB internal storage (UFS 2.1). 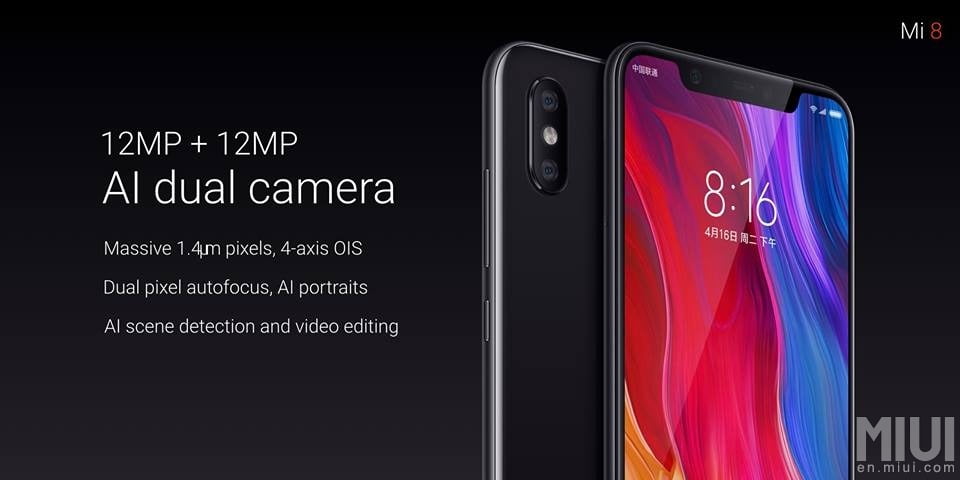 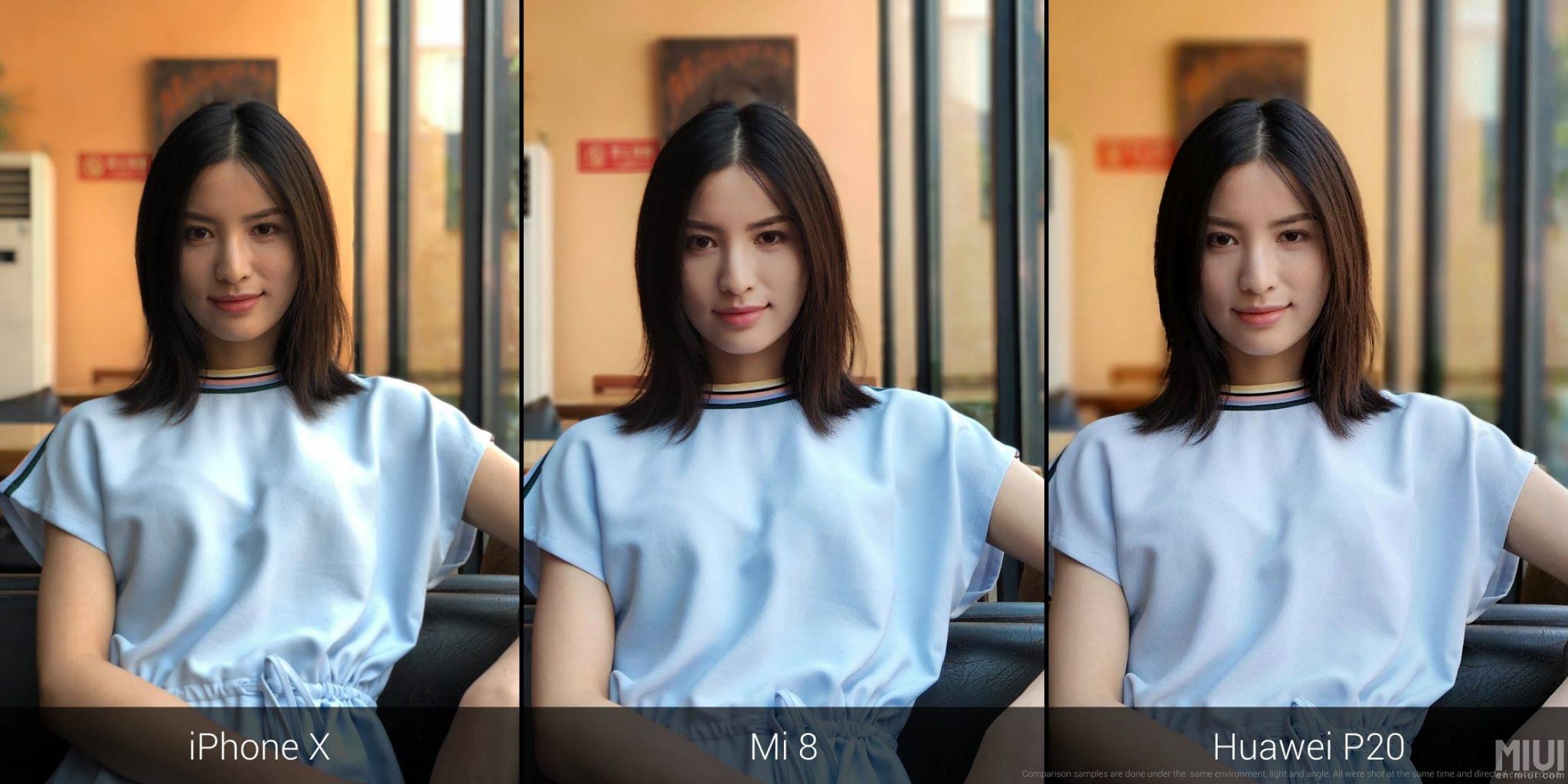 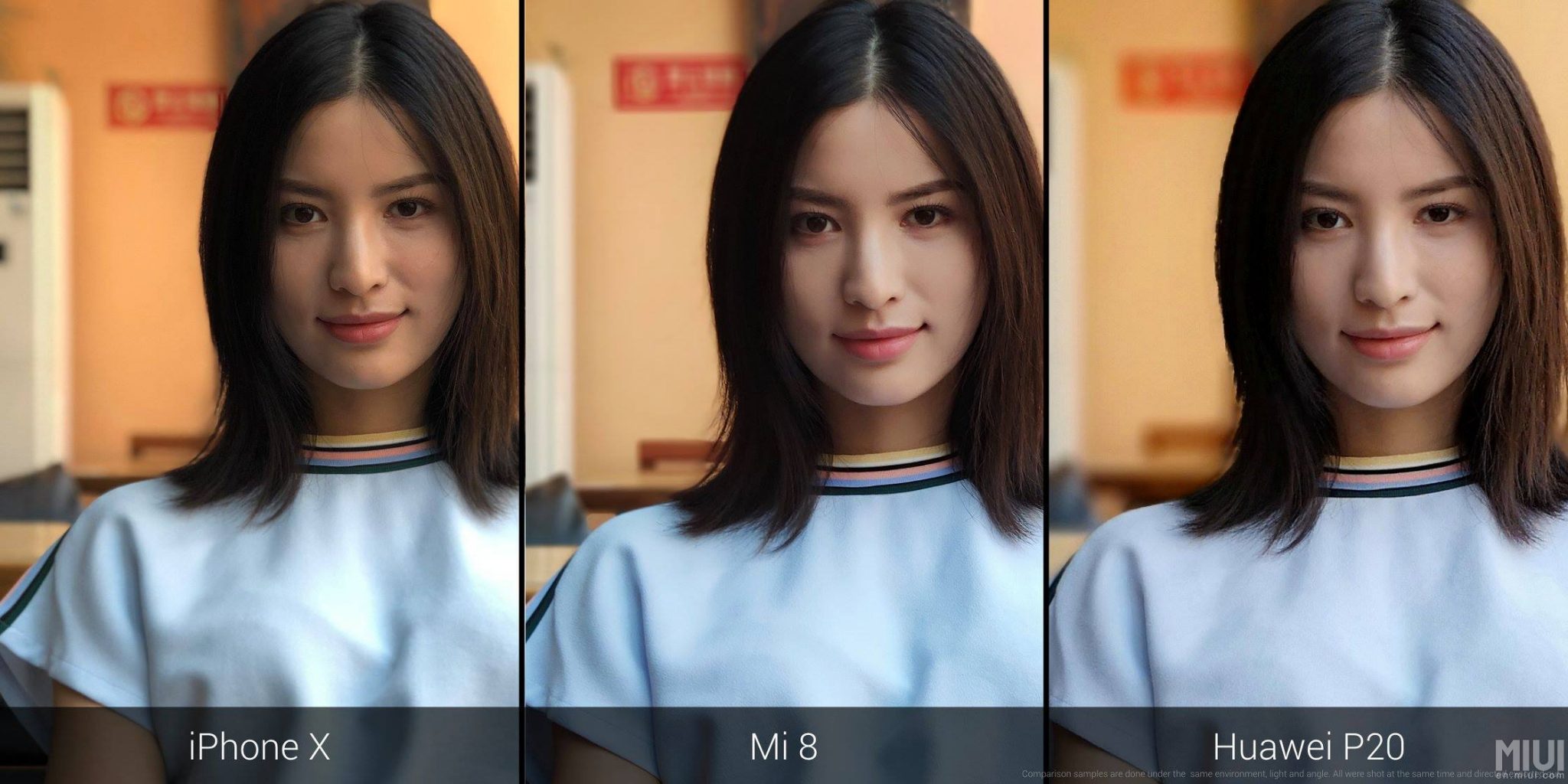 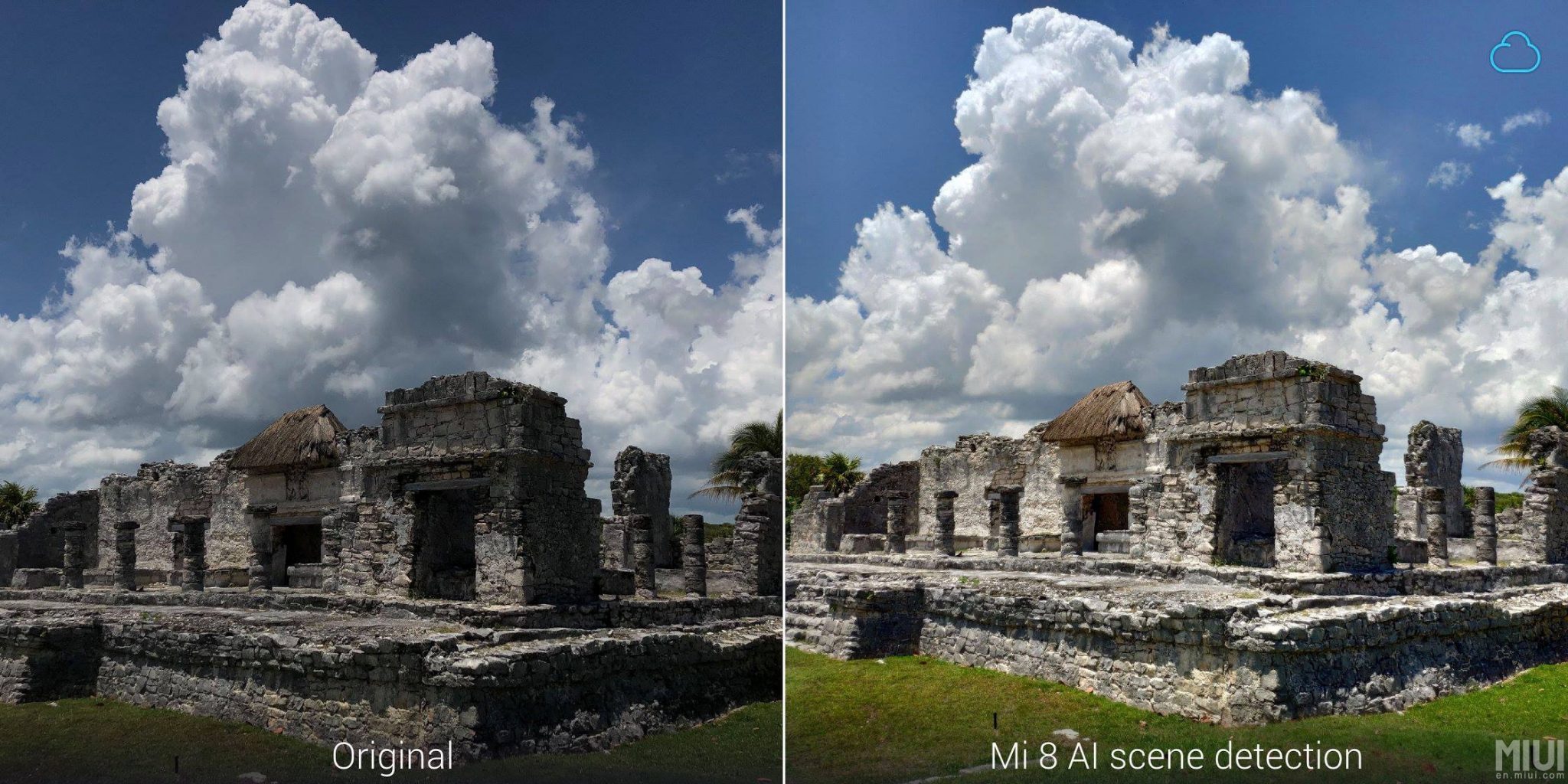 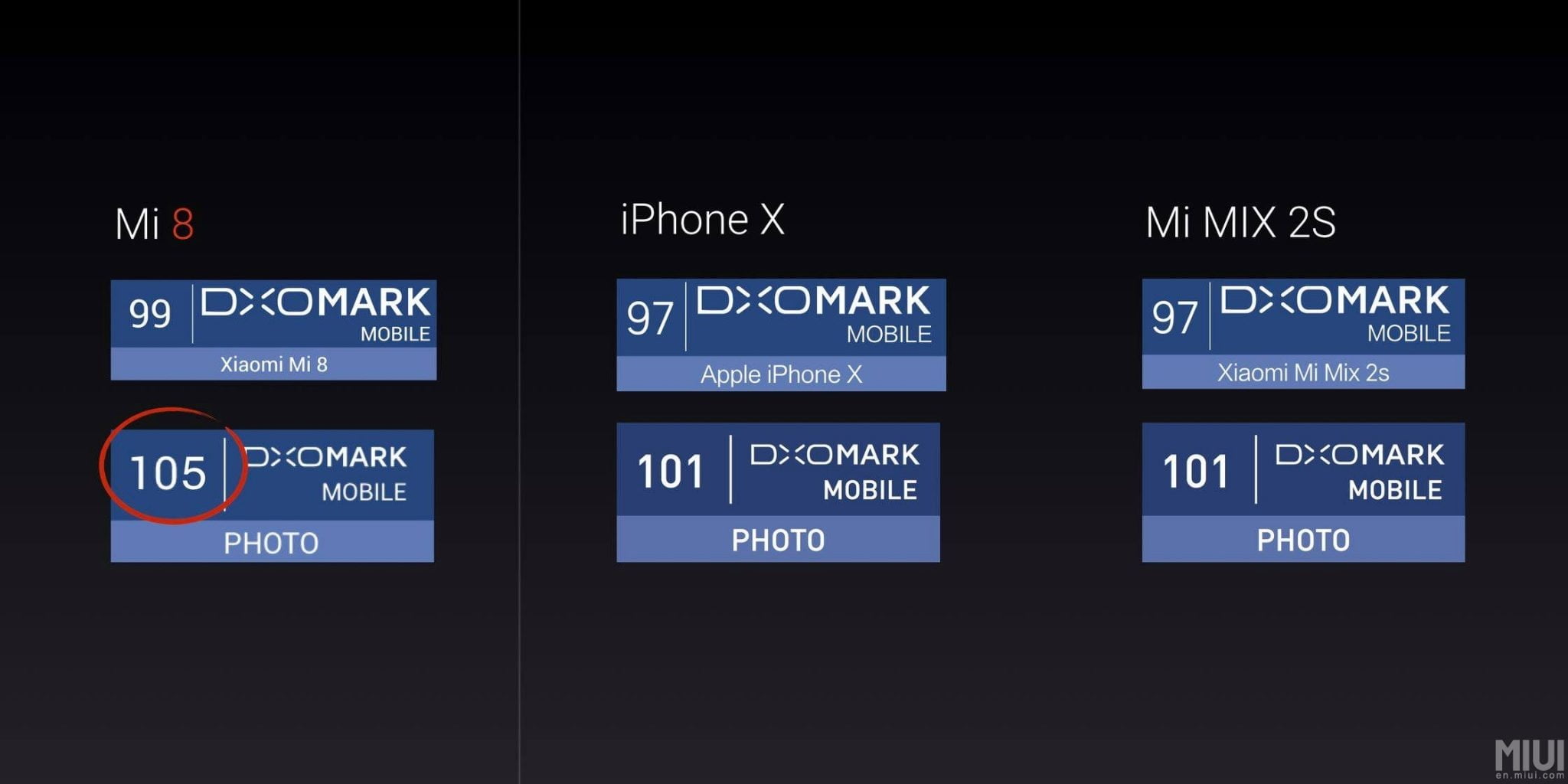 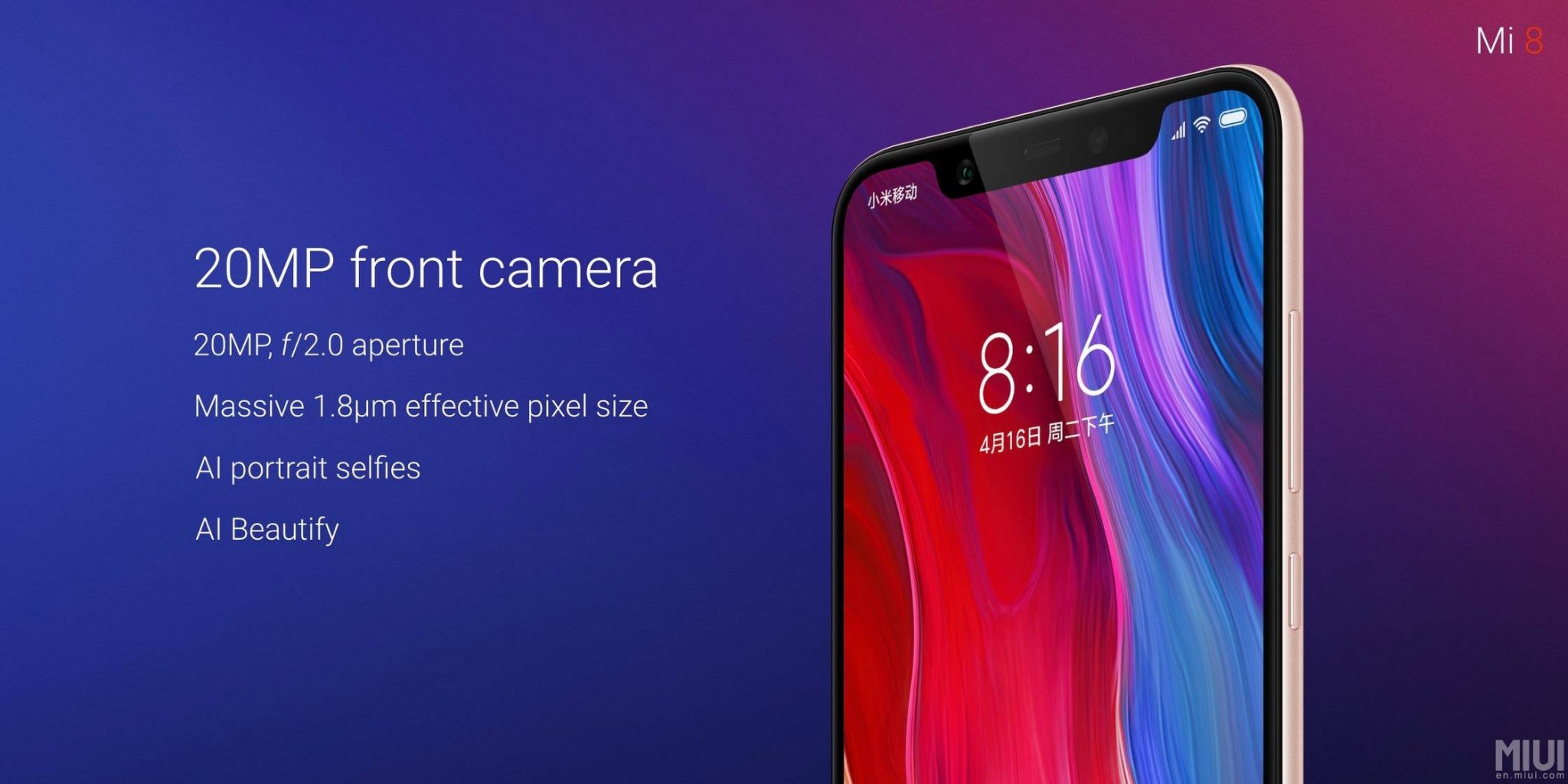 On the front, there is a 20MP camera with f/2.0 aperture, 1.8-micron effective pixel size, AI Portrait Selfies and AI Beautify. As mentioned above, it is also used for Face Unlock.

The battery under the hood is a 3,400mAh unit that also supports Qualcomm Quick Charge 4+ for fast charging. Other features include Bluetooth 5.0, NFC, Dual 4G VOLTE. 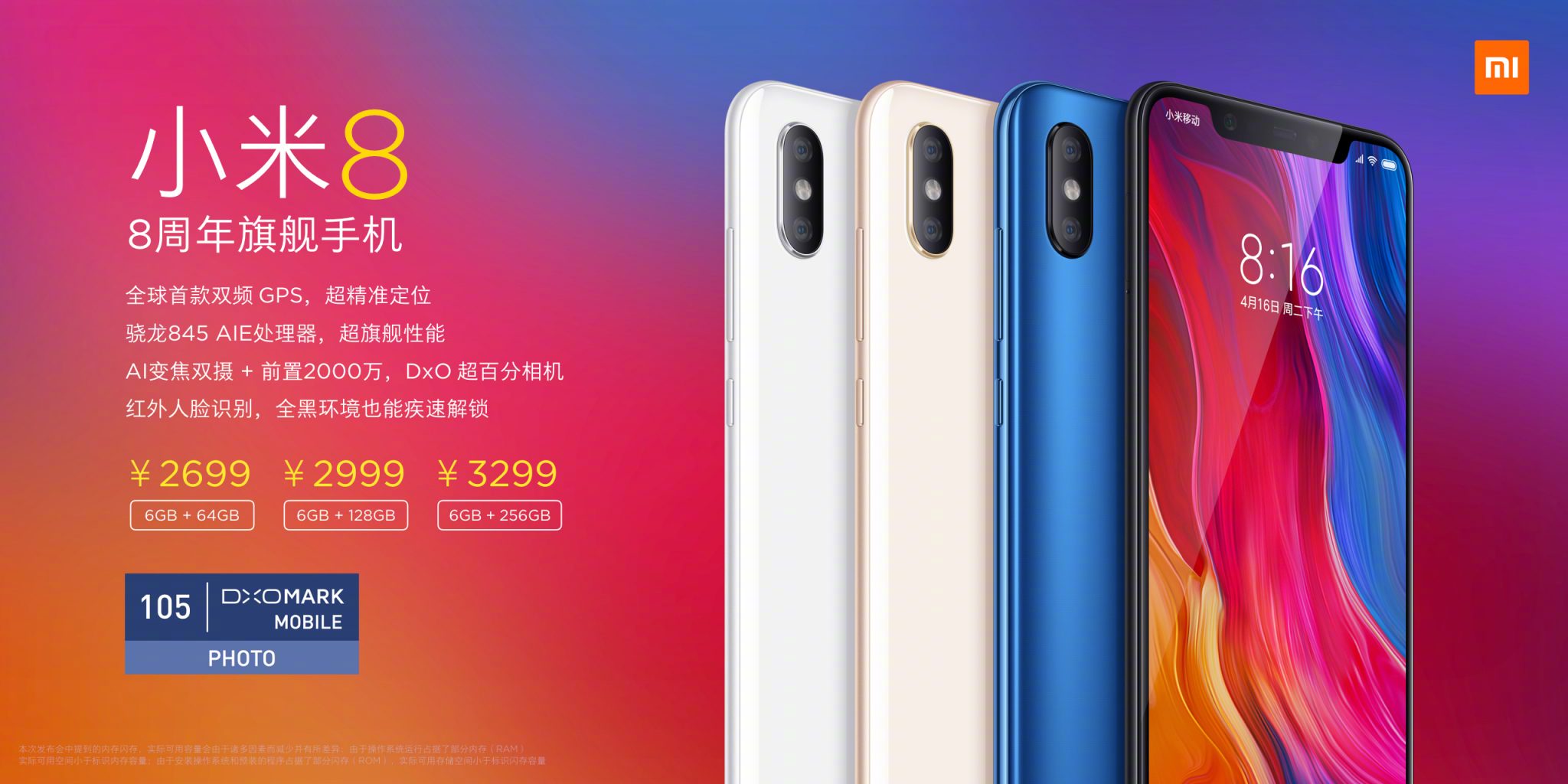 Finally, here is the Xiaomi Mi 8 pricing for the Chinese market –

As mentioned in the beginning, if the phone launches in the global market at the same pricing as in the Chinese market, it will be a big hit. Let’s see if Xiaomi has any plans to launch it globally or not.

LG V35 ThinQ is now official with Snapdragon 845 & no Notch