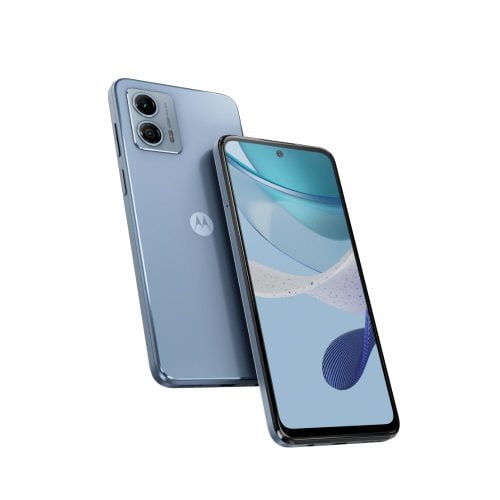 The Moto G13 & Moto G23 are pretty similar in terms of design & specifications. Both phones have a polycarbonate build with an IP52 rating. The back has a matte finish, whereas the camera module has a glossy finish. There are flat sides, a side-mounted fingerprint scanner, a USB Type-C port on the bottom, a 3.5mm headphone jack, and stereo speakers with Dolby Atmos support.

As for the specs, both phones are powered by the MediaTek Helio G85 SOC. The G13 comes in one storage option – 4GB + 128 GB. The Moto G23 offers the same storage option but also an 8GB RAM option. Both phones support microSD card up to 512GB. Both phones have a 5,000mAh battery, but while the G13 charges at 10W (which may change for different markets), the G23 offers up to 30W fast charging.

The display is also the same for both phones. It is a 6.5-inch IPS LCD with a 90Hz refresh rate and a 720p resolution. The display has Panda Glass protection & 400 nits brightness.

Coming to the cameras, both phones have a primary 50MP sensor and a 2MP macro shooter. But while the Moto G13 has a 2MP depth sensor, the Moto G23 has a 5MP ultrawide camera. The G13 has an 8MP camera for selfies, whereas the G23 offers a 16MP shooter. Finally, both phones run on Android 13 out of the box.

The Moto G53 is a budget 5G phone and the successor to the Moto G52, which was a 4G phone. The design of the G53 is identical to the G13 & G23, except for one difference. There is a dual camera setup on the back instead of a triple camera setup. The phone has a 3.5mm headphone jack, stereo speakers with Dolby Atmos, and a Type-C port.

As for the specifications, the phone has a Snapdragon 480+ chipset, which is the same chip that powered the Moto G51, and that phone launched in November 2021. There is a 5,000mAh battery with 10W charging (for Europe), which is weird since Moto G23 supports 30W charging. There is a 6.5-inch IPS LCD on the front with a 120Hz refresh rate and a 720p resolution. For comparison, the Moto G52 had a 90Hz AMOLED display. Even the Moto G51 had a Full-HD+ display, even though it was a 120Hz LCD. So, Motorola has done some serious cost-cutting this time.

Finally, we have the Moto G73, the most expensive phone among the four. It is powered by the MediaTek Dimensity 930 chipset, with 8GB RAM and 256GB storage. The display is still a 6.5-inch IPS LCD with a Full-HD+ resolution and 120Hz refresh rate. There is a 5,000mAh battery with 30W fast charging. The camera setup is the same as Moto G53, with the only major upgrade being video recording. Moto G73 can shoot Full-HD videos at up to 60fps via the rear camera, whereas it is limited to 30fps for the Moto G53.

There is a stereo speaker setup with Dolby Atmos, a 3.5mm headphone jack, a Type-C port, and an IP52 rating.