Recently, Xiaomi announced its sub-brand ‘POCO’ which confirmed the rumors related to the Pocophone F1, a flagship smartphone that is going to launch in various global markets soon (including INDIA). The company seems to have no plans to launch the Xiaomi Mi 8 in countries like India, but Pocophone F1 will be launching for sure. We have already seen a lot of leaks that revealed the design, specifications, benchmark scores and more. Today, the full unboxing and hands-on video of the XIaomi Pocophone F1 surfaced on YouTube, ahead of the official launch. 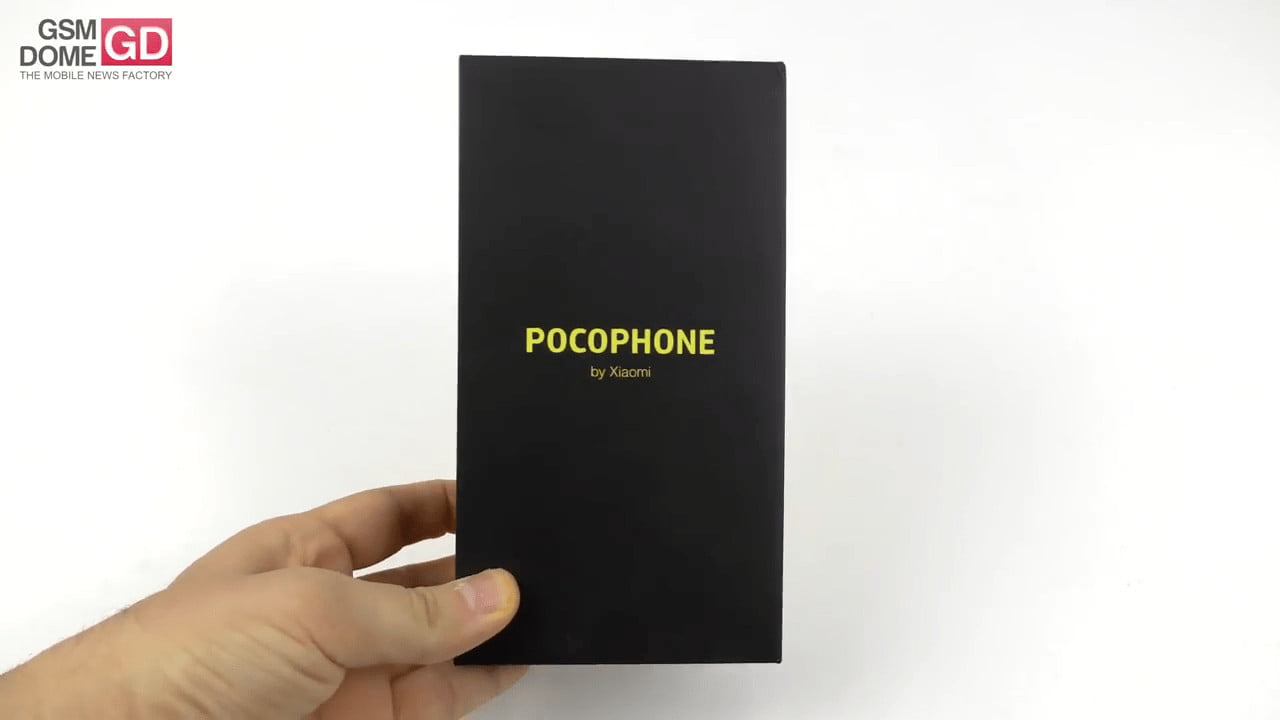 The YouTube channel GSMDome uploaded the video, and just like every other unboxing video, this shows the box contents, the device and quick hands-on with the phone. The reviewer states that the phone is priced at $489 but looking at the competition in markets like India, we can expect it to launch there with cheaper pricing. Anyways, the box comes in the Black and Yellow color scheme, which is the color scheme we saw on the official social media pages of ‘POCO’. 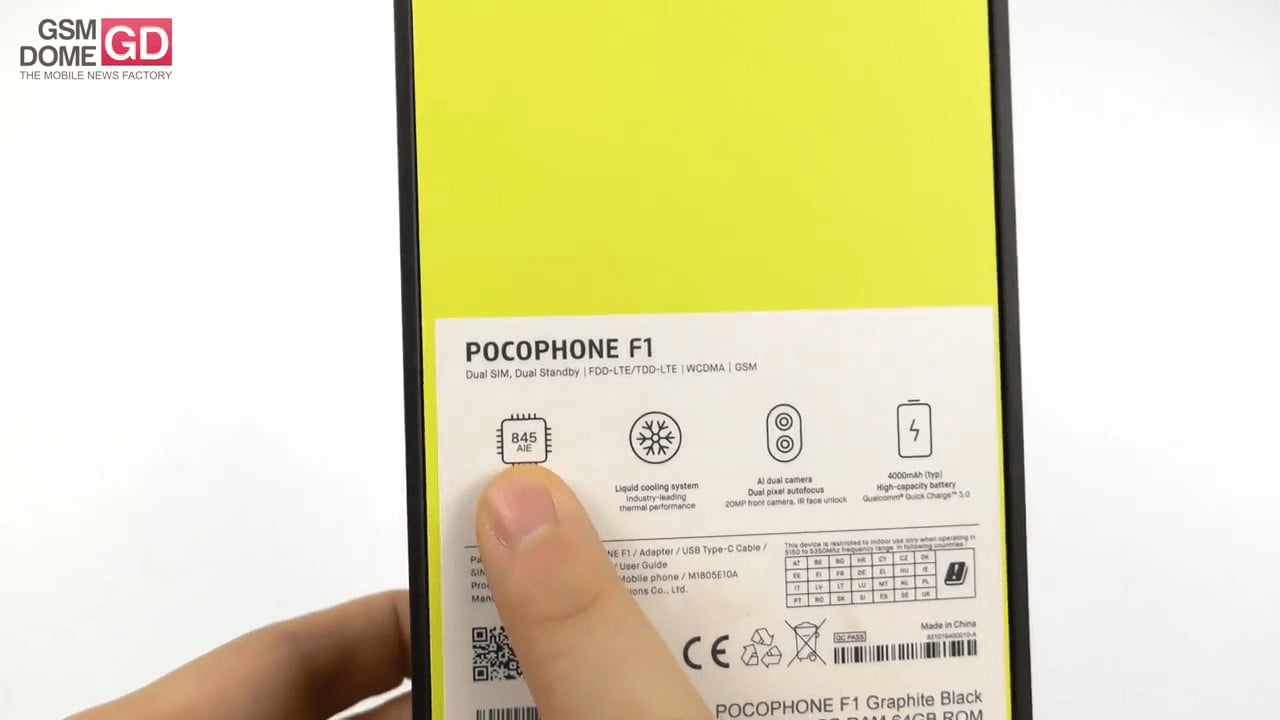 The Box reveals that the Qualcomm Snapdragon 845 powers the Pocophone F1 and there is a liquid cooling system as well. The phone has AI Dual cameras with Dual Pixel Autofocus, and there is a 20MP front-facing camera with Face Unlock. The Pocophone F1 has a 4,000mAh battery that supports Qualcomm Quick Charge 3.0 as well. The device shown in the video is the Graphite Black variant with 6GB RAM + 64GB ROM. There are two more variants of the phone – 6GB RAM + 128GB ROM & 8GB RAM + 256GB ROM. The other color options include Red, Blue, Kevlar (only for 8GB variant) & Gradient. 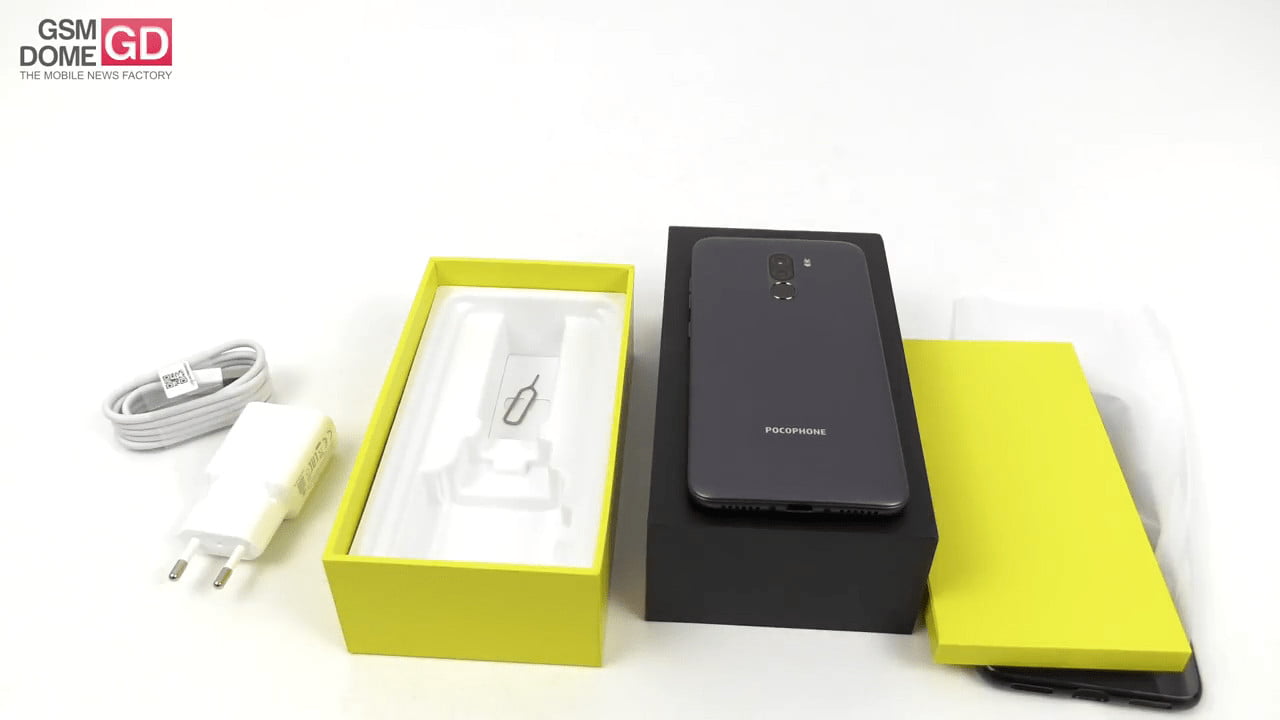 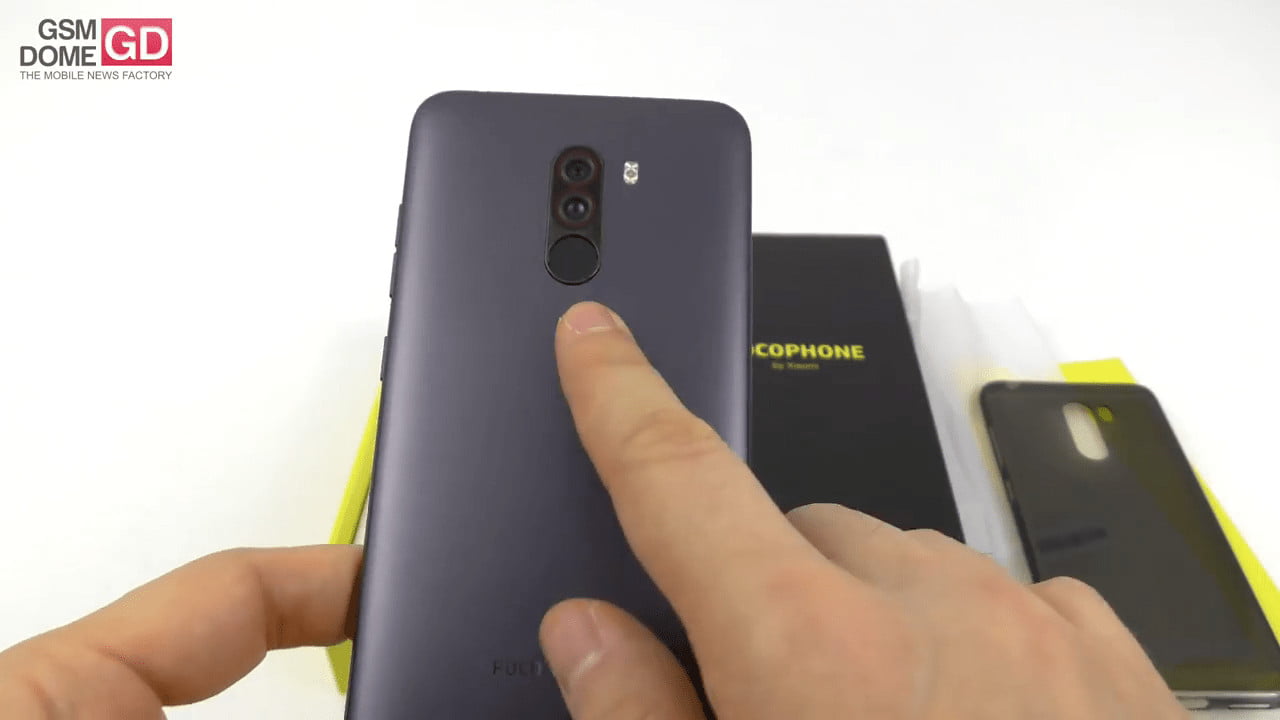 Inside the box, there is the silicon case for the device, Adapter, Type-C Cable, the SIM ejector pin and the phone itself. The Xiaomi Pocophone F1, as all the leaks revealed, has a different design on the rear than all the Xiaomi phones launched this year. There is no iPhone X-like camera set up this time which you might appreciate, but the notch is still there on the front. 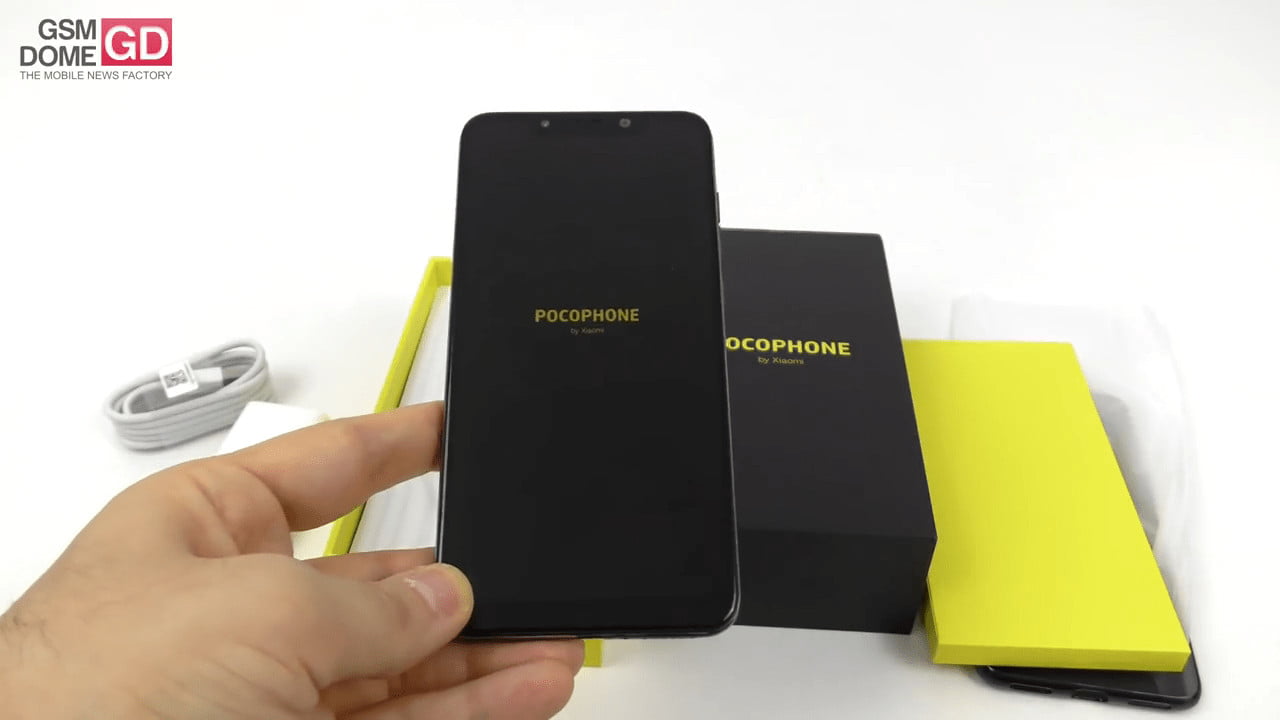 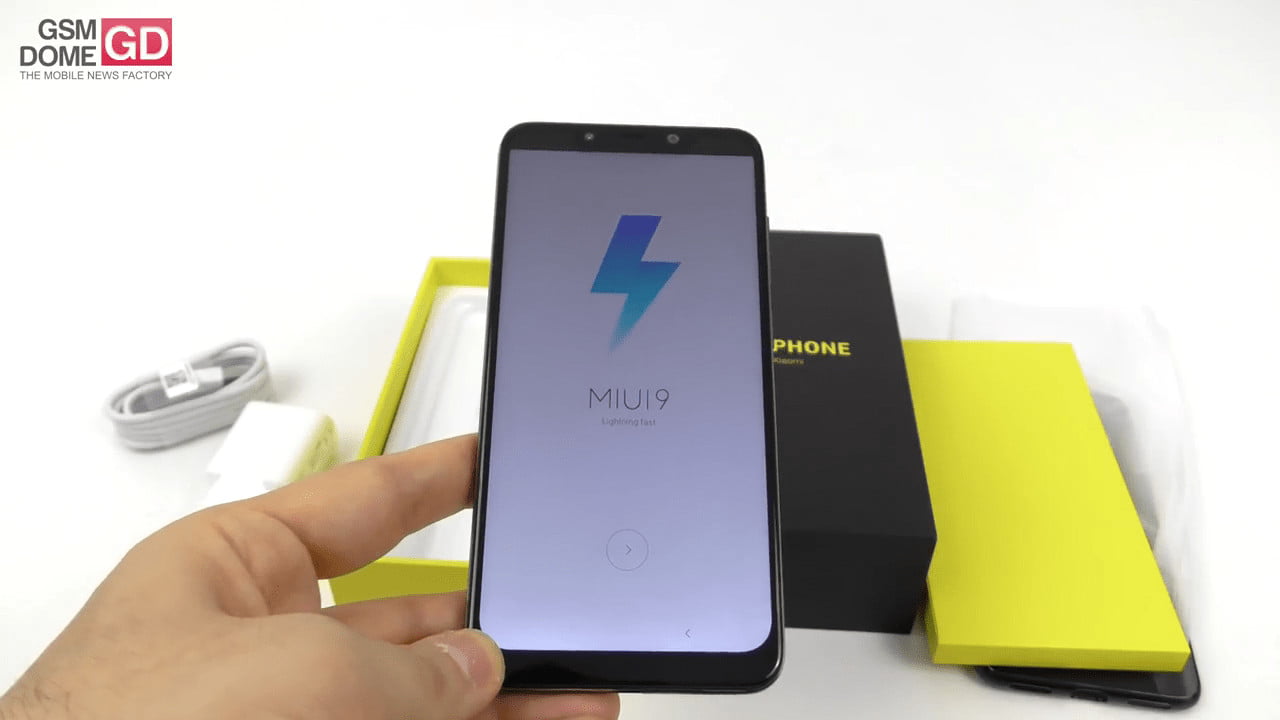 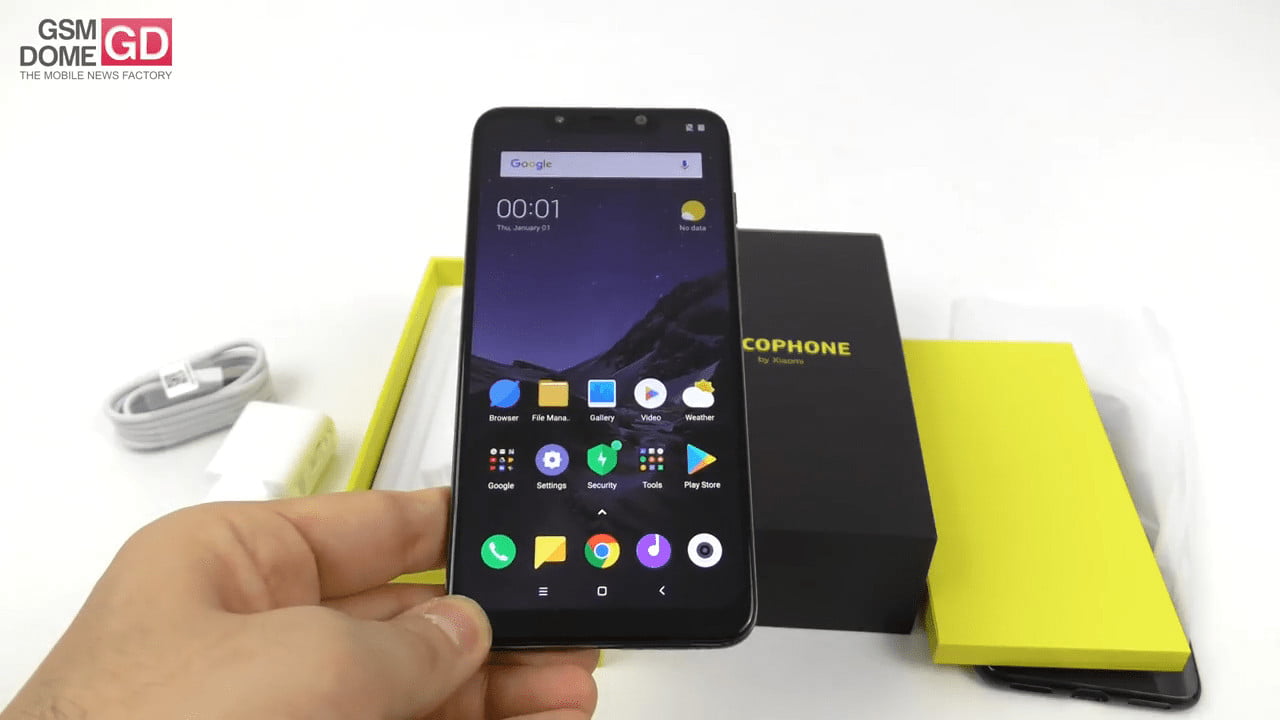 Talking about the front of the phone, the Xiaomi Pocophone F1 has a similar design from the front as the Mi 8. So, there is a notch and a huge bottom chin. MIUI 9 runs out of the box so no stock Android for those who were expecting it. Other specifications of the phone include a 5.99-inch Full-HD+ IPS LCD, 12MP + 5MP dual rear cameras, Android 8.1 Oreo etc.

Well, we don’t know when the Pocophone F1 is officially launching but the company is teasing the phone on its social media pages so expect the launch to happen pretty soon.