With 2018 being the year of smartphones with notches, we have seen quite a few devices that have a full-screen design with minimal bezels and no notch. Now, to remove the notch, you need to place the front camera and other sensors somewhere else. Vivo and Oppo did it by using a sliding mechanism for the front camera (in case of Vivo NEX), sensors and the earpiece (Oppo Find X). Today, the Xiaomi Mi Mix 3 was officially launched in China as company’s fourth smartphone in the ‘Mix’ series. 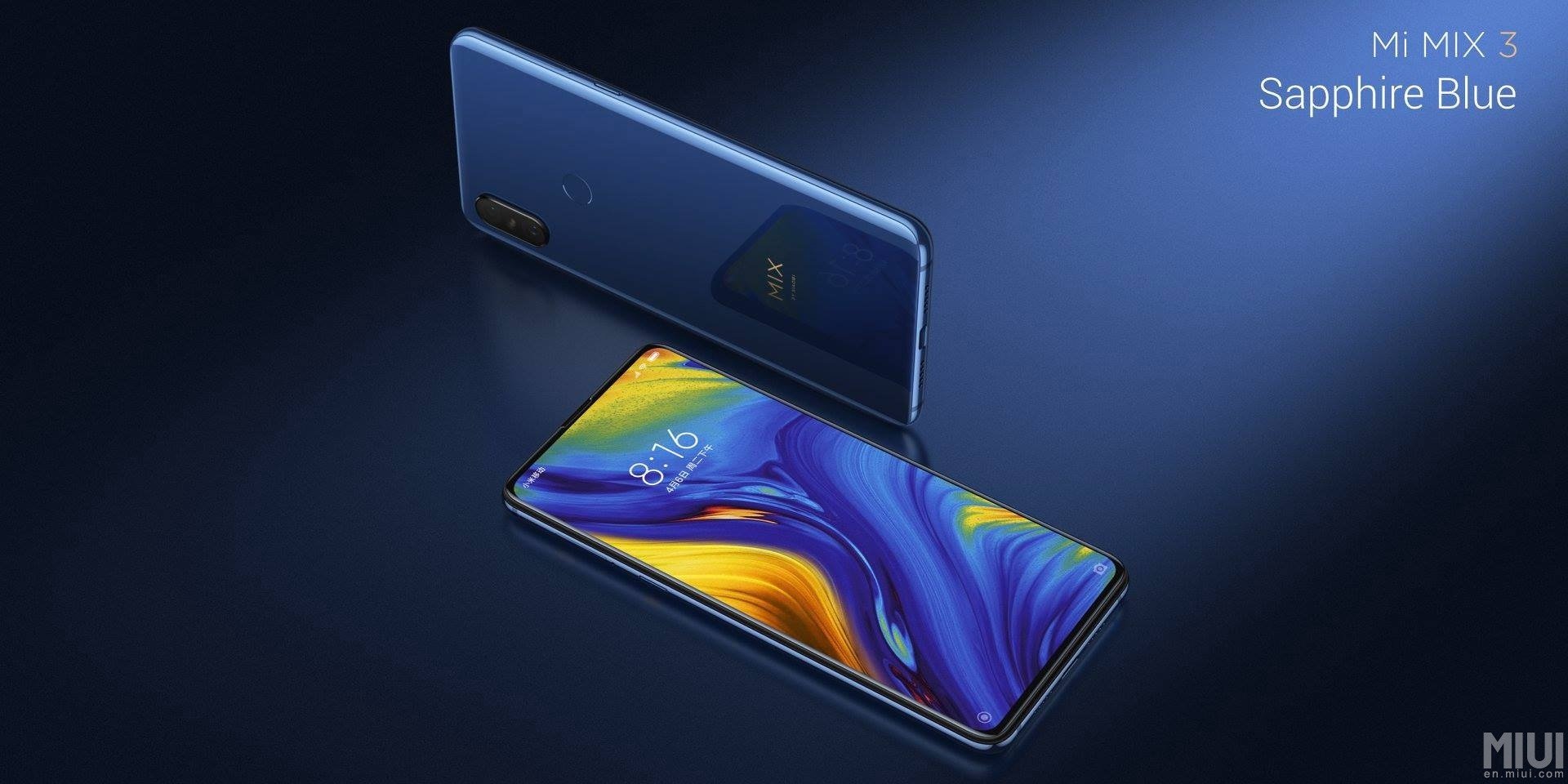 Like the previous Mix series phones, the Mi Mix 3 has a bezel-less design. This time, Xiaomi took it to the next level. Instead of placing the front camera on the bottom chin, the company reduced the size of the chin significantly by hiding the front camera and other sensors that are accessed using the magnetic slider. So, it is a similar placement like the upcoming Honor Magic 2. 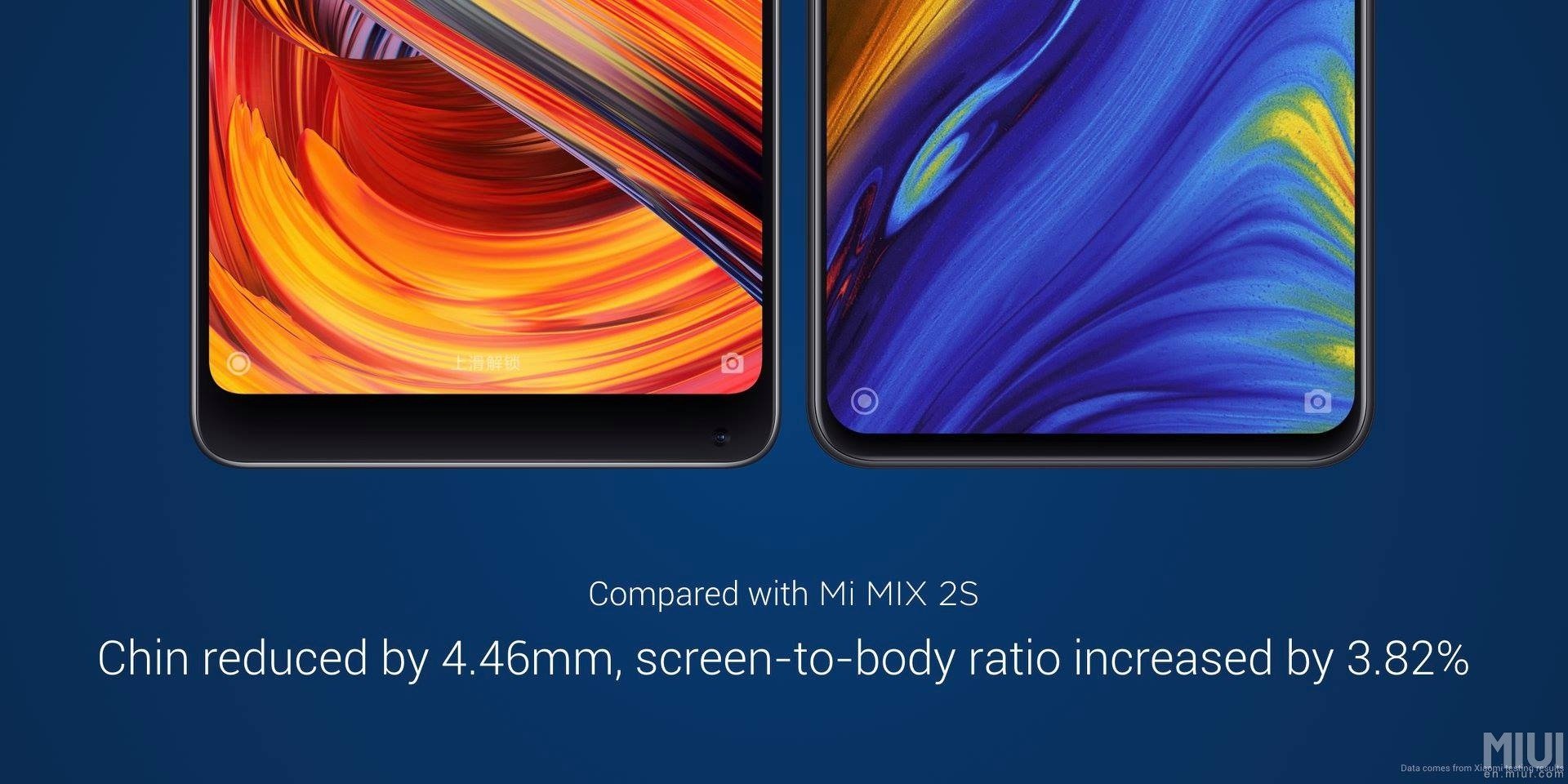 The Life expectancy of this magnetic slider is 300,000 cycles, and there are Neodymium Magnets inside. Like every Mix phone, the Xiaomi Mi Mix 3 has a beautiful design. There is a tapered ceramic back, and the frame is made of 7000-series aluminum.

As expected, there is no in-screen fingerprint scanner as the phone has one on the rear. The design on the rear remains unchanged from the Mi Mix 2S, so we still have that iPhone-like vertical dual camera placement. 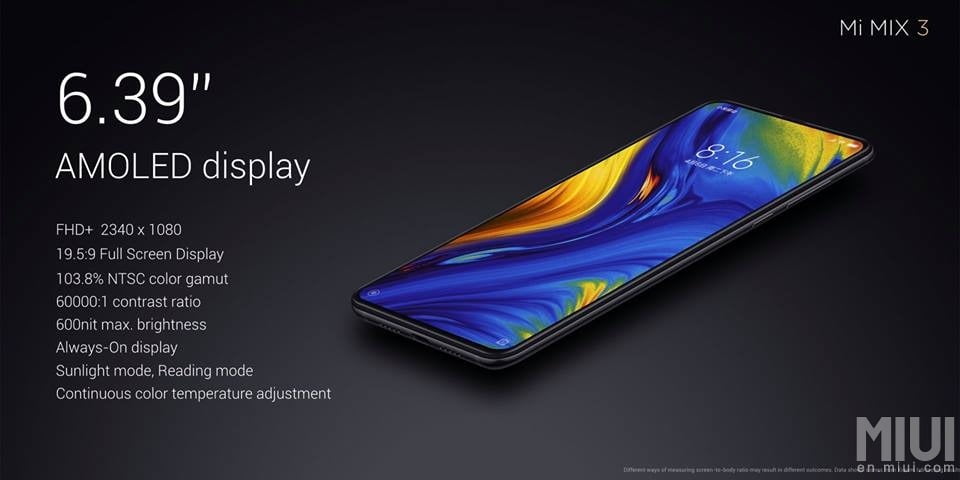 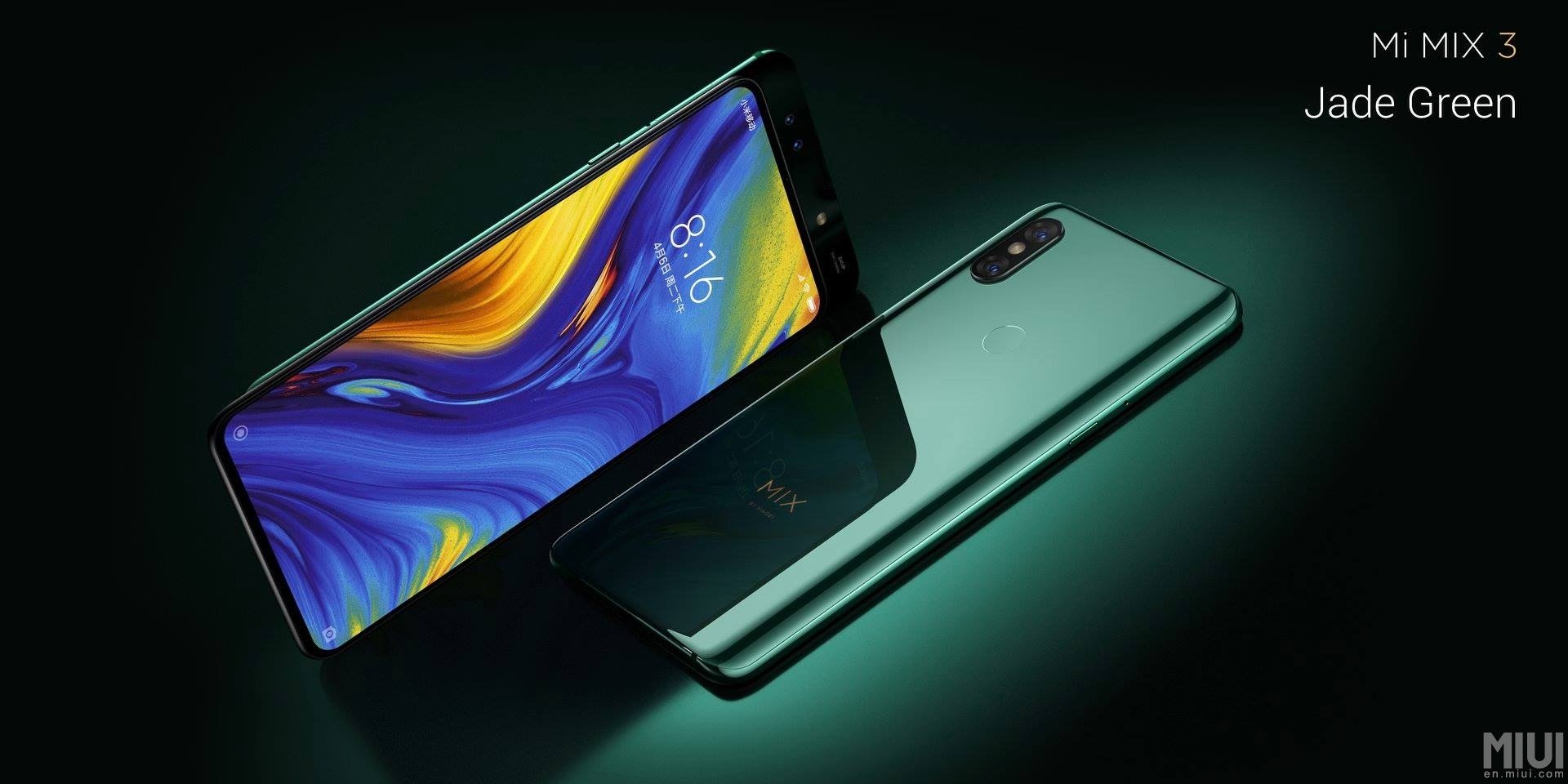 Coming to the performance, the Xiaomi Mi Mix 3 is a flagship, so it packs the Qualcomm Snapdragon 845 processor, along with the Adreno 630 GPU. There 6/8 or even 10GB RAM with 128/256GB internal storage. The Mi Mix 3 is, therefore, one of the first smartphones in the world to launch with 10GB of RAM. 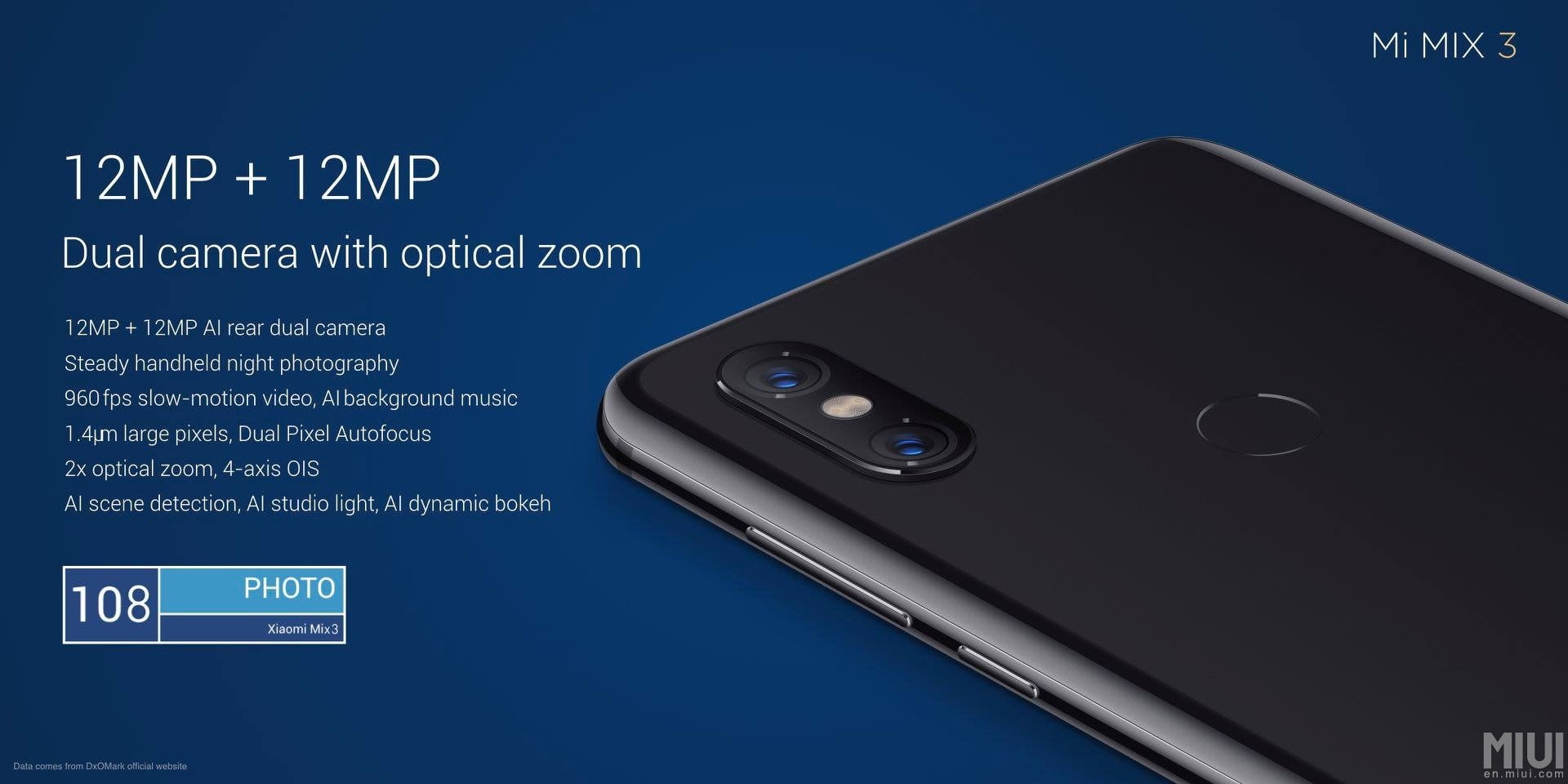 On the rear, there is a dual camera setup that includes a primary 12MP Sony IMX 363 with 1.4-micron pixels and dual pixel autofocus. There is also a 12MP secondary telephoto lens with 2X Optical ZOOM. The camera can shoot 960fps Super Slow motion videos, and there is 4-axis OIS for stable videos. Some AI features like AI Scene detection, AI Studio Light, AI Dynamic Bokeh, etc. are also present. 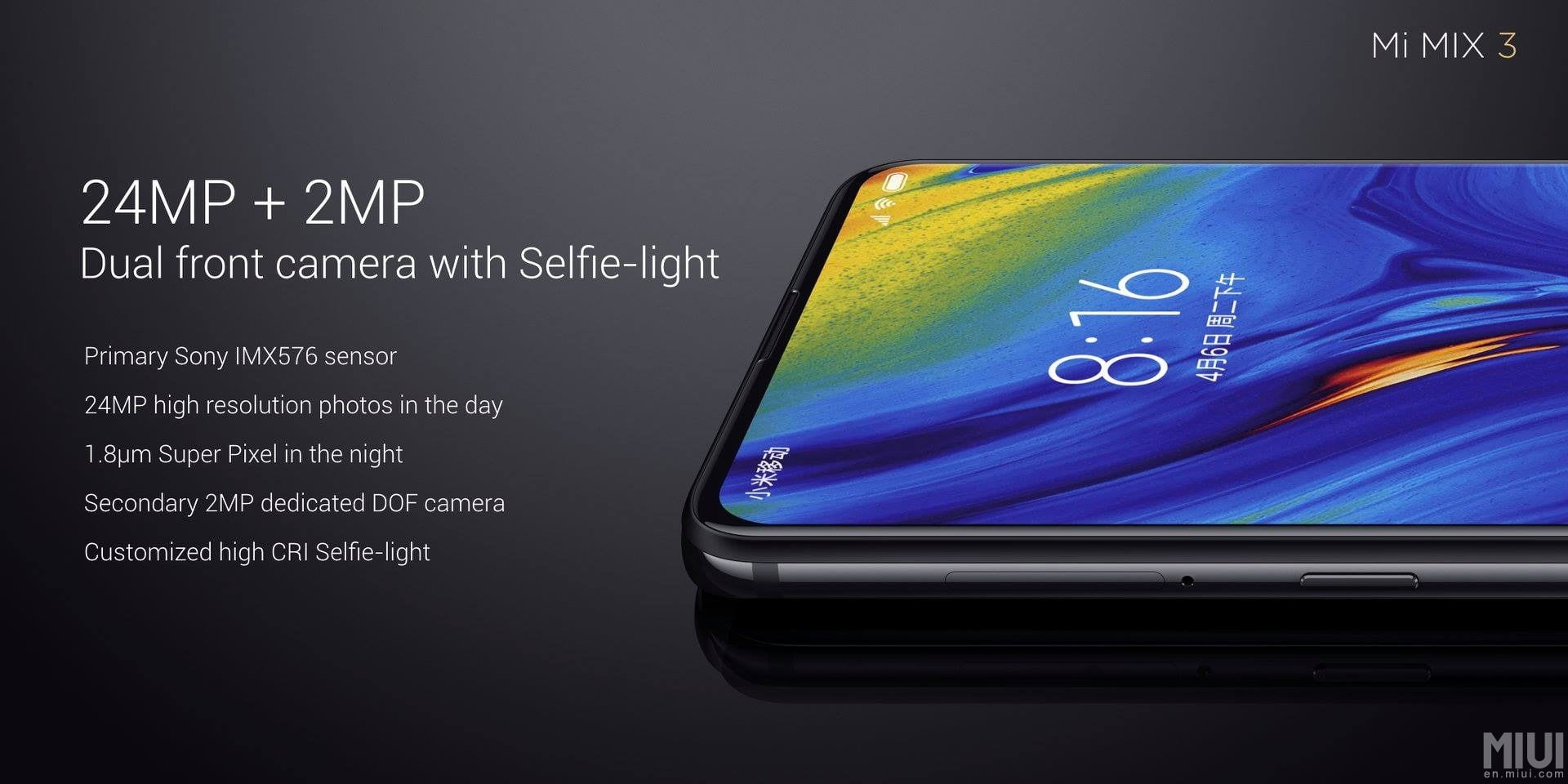 There are dual cameras on the front as well. So, there is a 24MP primary camera with Sony IMX576 sensor and 1.8-micron Super Pixel (via Pixel binning) in low-light. There is a 2MP secondary camera for Depth information.

The Xiaomi Mi Mix 3 scored an overall 103 on DxOMark which is great. 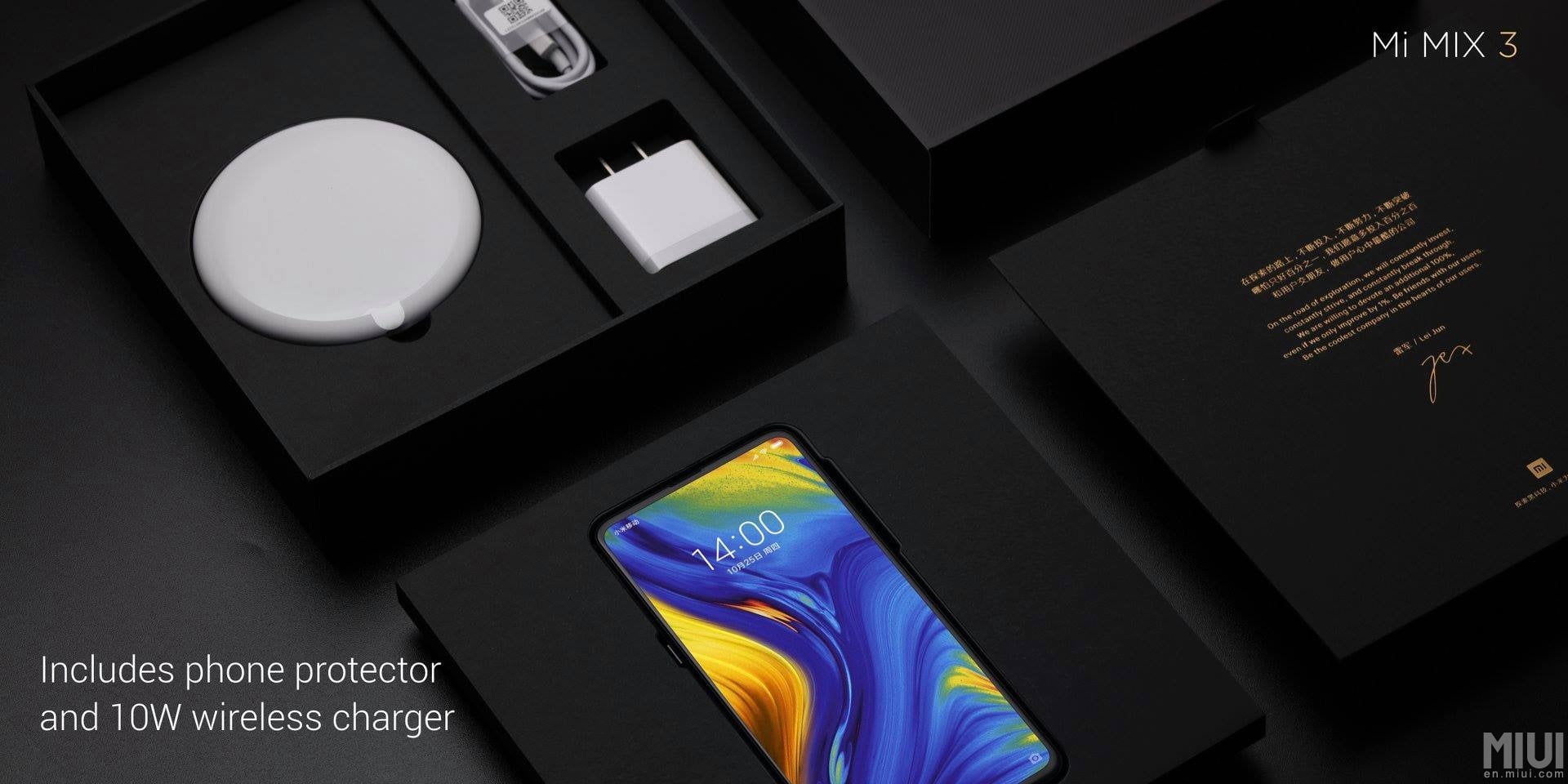 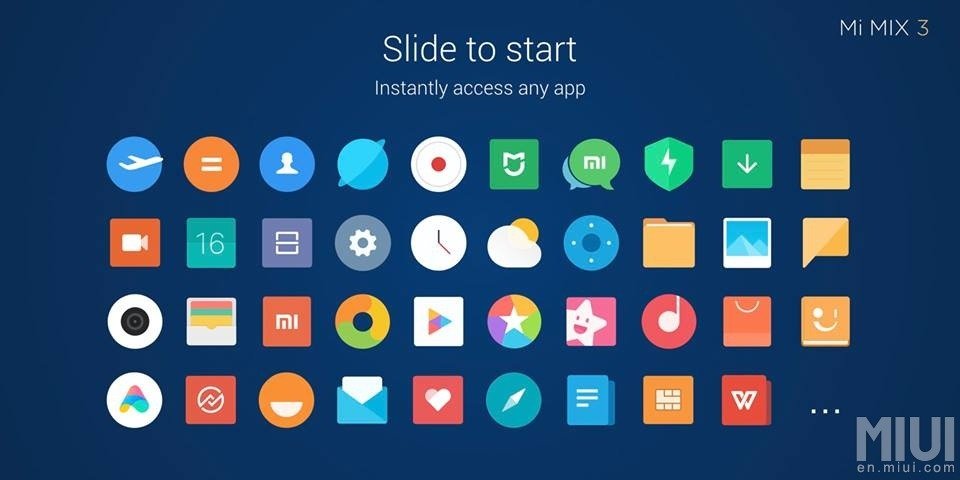 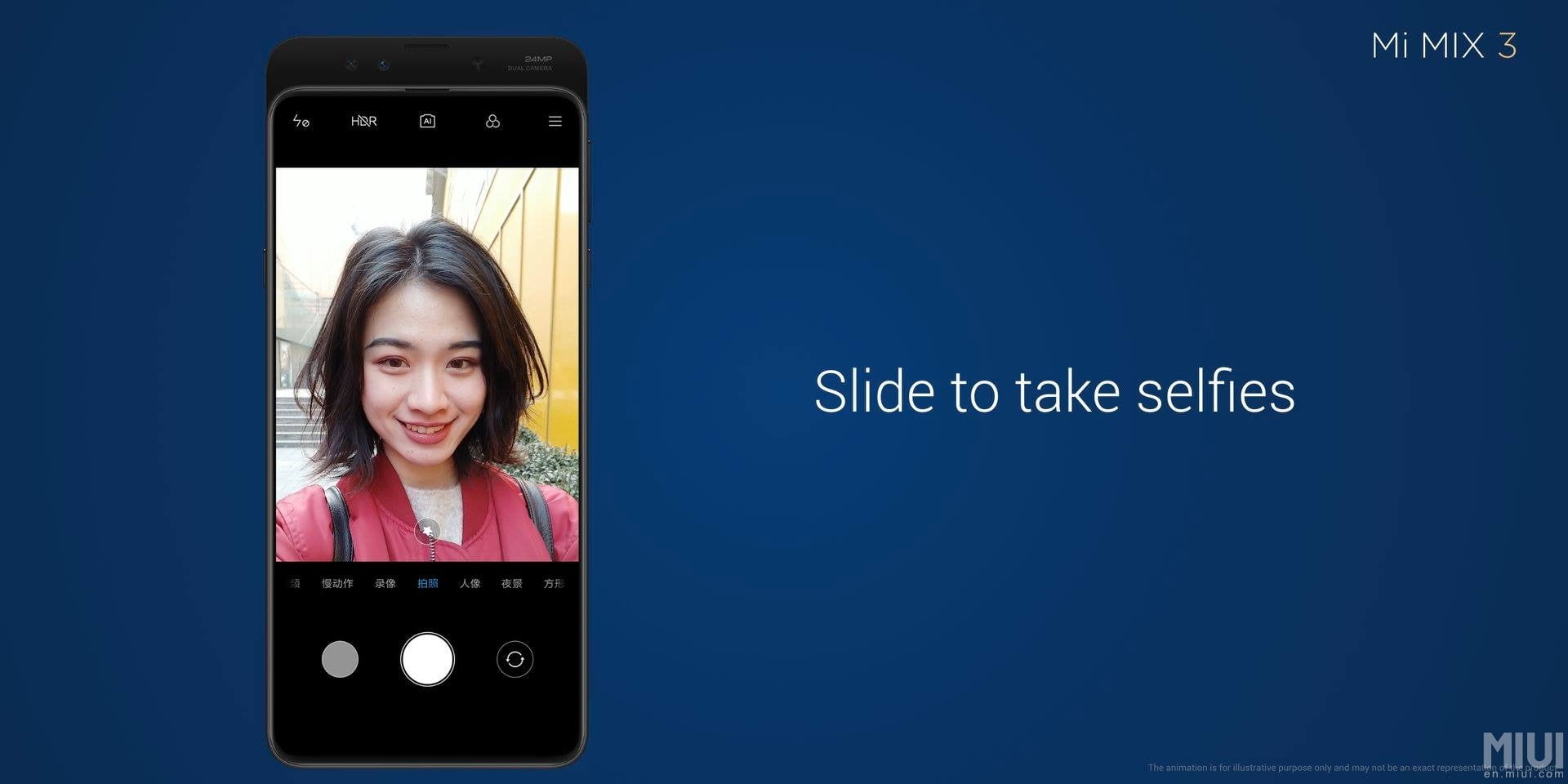 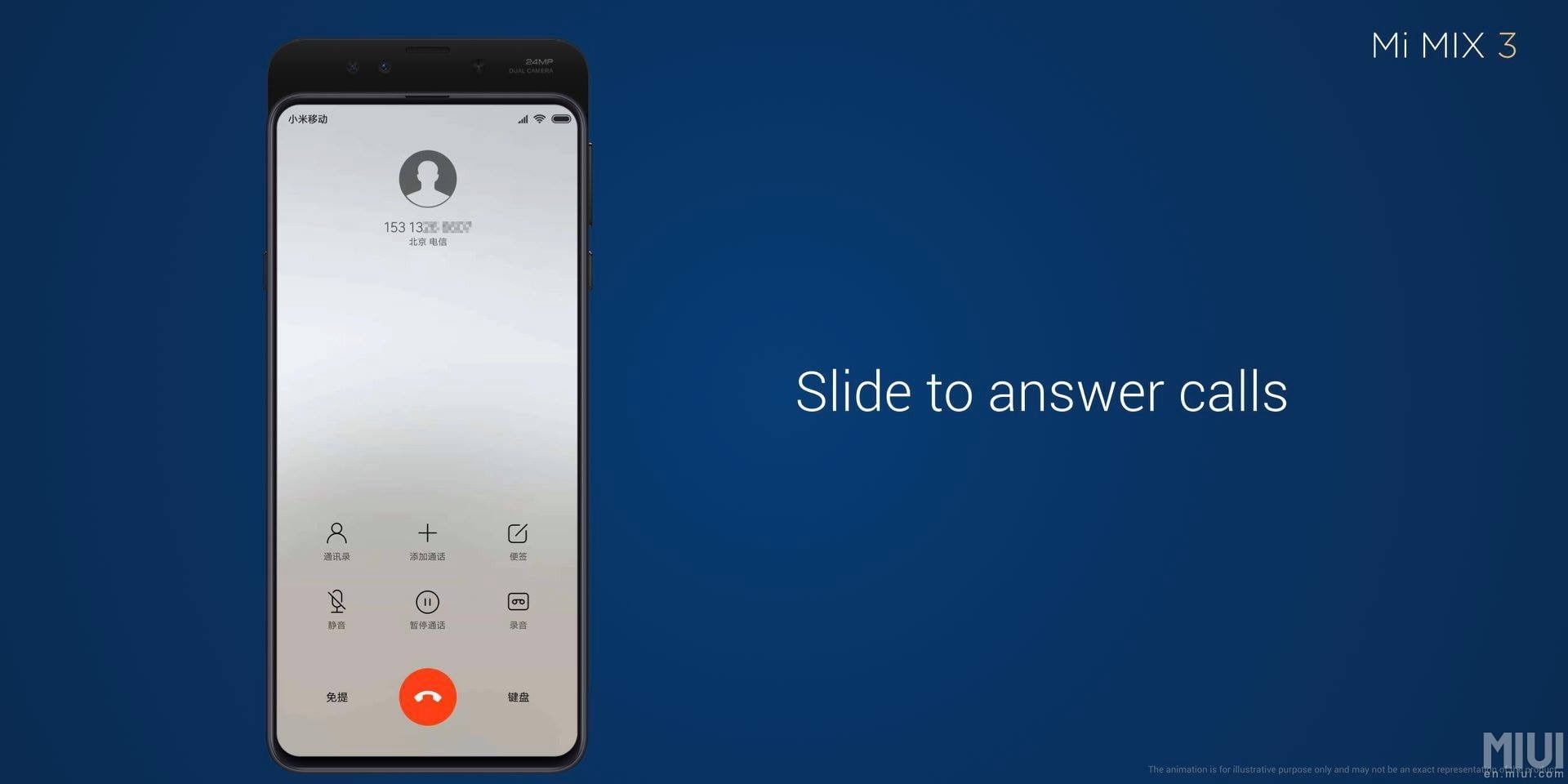 The Slider can even be assigned to launch any application which is sweet. In addition to that, the users can slide the phone to take selfies or even attend incoming calls. 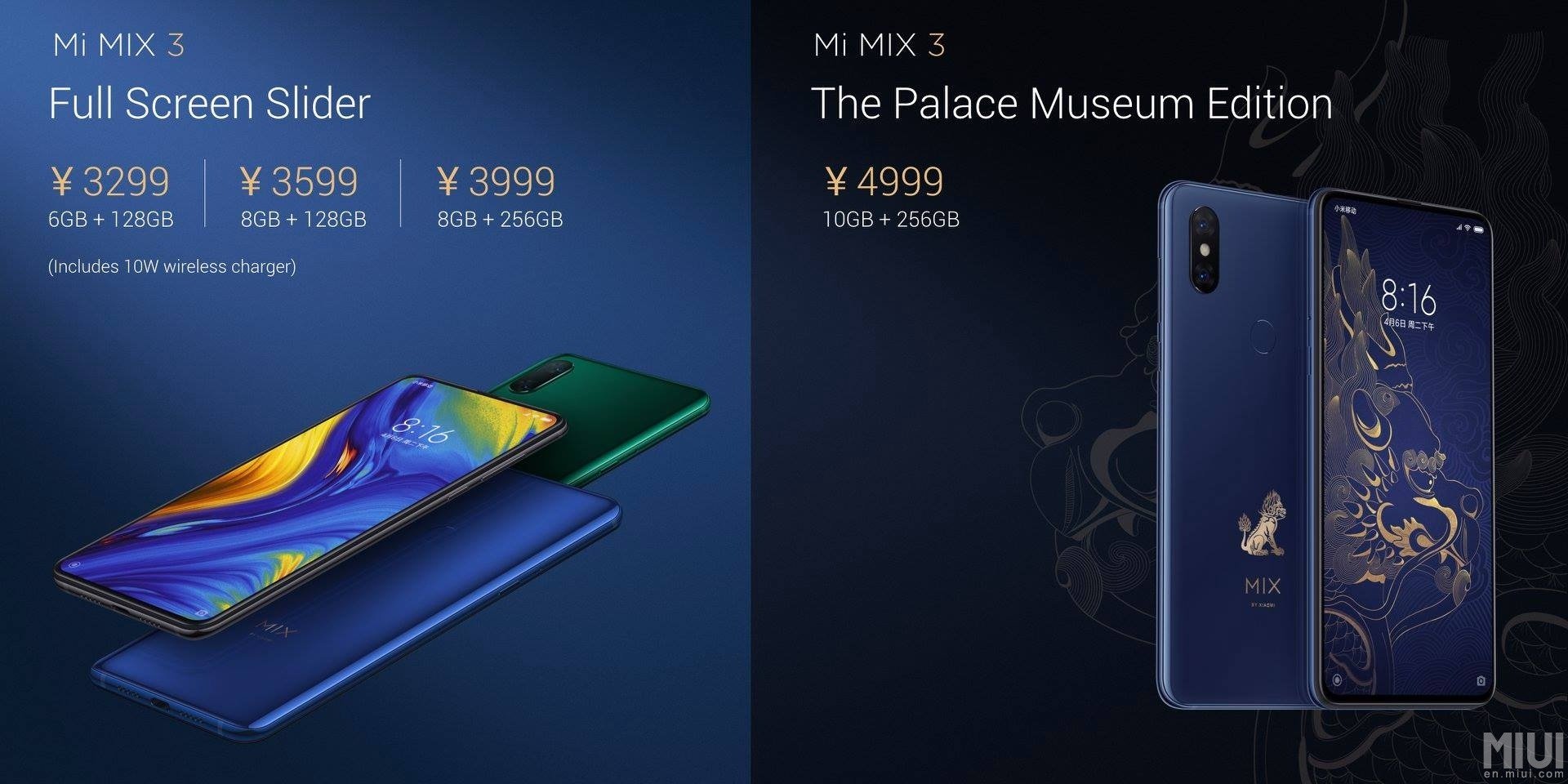 Finally, talking about the pricing and availability, the phone comes in three colors – Onyx Black, Jade Green, and Sapphire Blue. The pre-orders have begun in China, and the phone will start shipping from November 1. There is also a special ‘The Palace Museum Edition’ with 10GB RAM and 256GB storage. Here is the pricing –