Xiaomi Mi A3 gets the unboxing treatment, everything confirmed

Xiaomi Mi A3 is launching tomorrow in Spain & so far, we have seen the official press renders as well as the hands-on images of the phone. Today, the phone was unboxed & all the photos, as well as the details related to the device, were shared by a Malaysian website, SoyaCincau. This now confirms everything we know about the upcoming Mi A3. 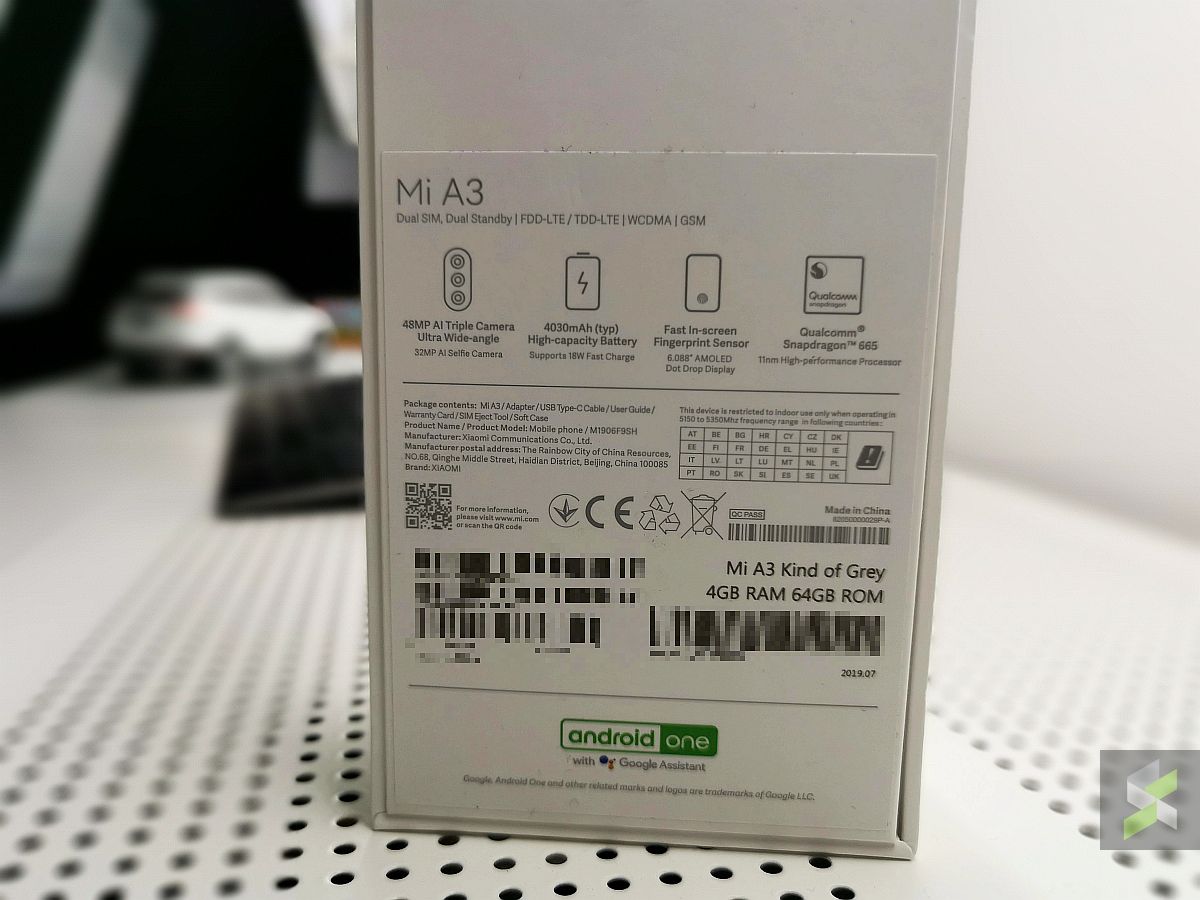 The retail box shows that it is the 4GB + 64GB variant in “Kind of Grey” color. There are some highlights mentioned on the box like a triple camera setup that has a primary 48MP camera & an ultra-wide-angle camera, a 32MP front camera, 4,030mAh battery with 18W fast charging, in-display fingerprint scanner, 6.08-inch HD+ AMOLED screen & Snapdragon 665 SOC.

As we already know, the Xiaomi Mi A3 is simply the rebranded Mi CC9e with Android One branding. So, it is running stock Android out of the box & will receive the two major Android updates. The rear has glass, making it look premium as well as feel premium. The website clearly says that inside the box, you get the 10W charger so this means you have to buy the 18W charger separately. Come on, Xiaomi!

Unlike last year, the headphone jack is there & the phone gets a USB Type-C port. There is a micro SD card slot as well, but you have to sacrifice one of the SIM cards for that if you have two SIM cards. Weirdly, the screen is HD+ instead of FHD+. It’s AMOLED, so that’s a good thing. The HD+ screen further hints at a “Pro” version of Xiaomi Mi A3, but that’s just a rumor as of now.

Coming to the cameras, there is a primary 48MP f/1.8 camera, a secondary 8MP f/2.2 ultra-wide-angle camera, & a third depth sensor. On the front, there is a 32MP AI Selfie camera. Android 9 Pie runs out of the box with June security patch. Interestingly, the Bluetooth version is 4.2.

Well, we don’t think there is anything left now to know about the Mi A3 except for the pricing. The phone doesn’t seem like a significant upgrade from Mi A3, so we hope there’s a Xiaomi Mi A3 Pro as well.