Sony is launching some new phones on the February 24th event & now we got to know that Sony is making its naming style even more confusing. The next premium flagship from Sony is the Sony Xperia 1 II & yes, even we are confused about how to pronounce it (Sony Xperia 1 2 or Xperia 1 Mark 2?).

In January, the CAD renders of the upcoming premium flagship from Sony leaked & it was assumed that it would launch as Xperia 5 Plus. But a new leak has now revealed that this phone is actually the Xperia 1 II. 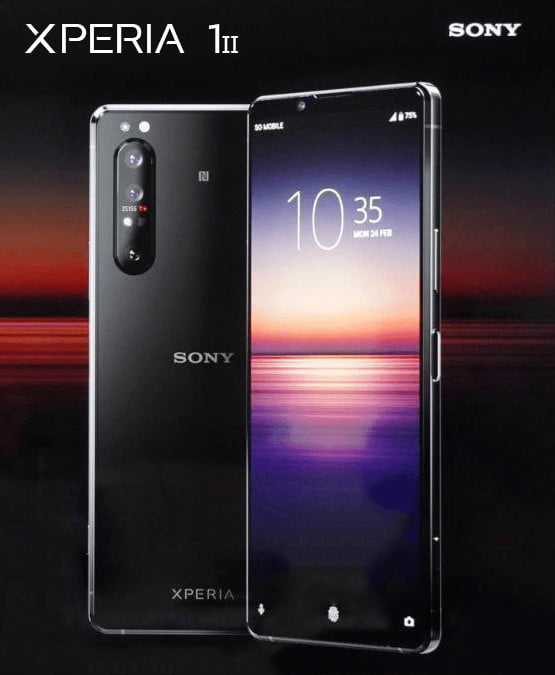 As we can see in the image above, the Xperia 1 II features no notch or holes in the display & the selfie camera, along with other sensors & the earpiece, is placed in the top bezel. There are almost no bezels at all on the sides. On the rear, there is a triple camera setup with a fourth Time of Flight sensor.

We can also notice the ‘ZEISS’ branding suggesting a partnership with ZEISS for the camera optics, just like Nokia.

The volume rockers, camera shutter button, and the power button (with fingerprint scanner) are all placed on the right side. There is a USB Type-C port on the bottom & interestingly, there is a headphone jack on the top. It is worth mentioning that the Xperia 1 of last year didn’t come with a headphone jack!

The full specifications of the Sony Xperia 1 II have also leaked, so talking about these now, the phone has a 6.5-inch 4K HDR OLED display with 21:9 aspect ratio & Motion-Blur-Reduction which means you will get a feel similar to a 90Hz panel even though the refresh rate is 60Hz. Interesting!

The fourth sensor that we see in the image is a Time of Flight sensor. On the front is an 8 Megapixel camera for selfies. Finally, there is a 4,000mAh battery & the phone supports Wireless Charging as well. The color options include Black & Purple, and the device is IP65/68 dust & water-resistant.

Well, the specifications are great on paper, but as always, it all comes down to the price at which Sony will be launching this premium flagship.