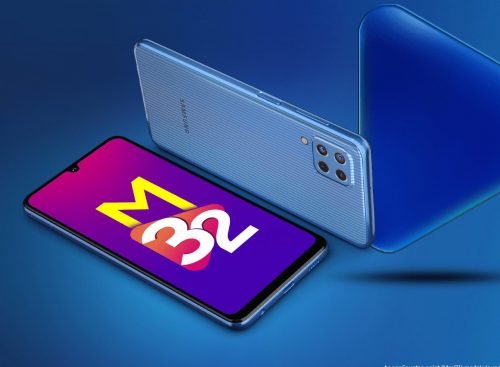 The Samsung Galaxy M32 is now official in the Indian market, and as the name suggests, this is the successor of last year’s Galaxy M31. The M21 launched at a starting price of Rs 14,999 in India, and for that price, it offers a 90Hz Super AMOLED display, a massive 6,000mAh battery, a 64 Megapixel camera, and more. The chipset does seem like one of the weaker aspects of this device, and we will talk about all of that later in the article.

Design-wise, the phone comes with an Infinity-U display on the front which means instead of the hole-punch cutout that we see on phones these days, it has a waterdrop notch for the selfie camera. Still, because Samsung went for an AMOLED panel, it is safe to say that going for a notch instead of a hole punch was required to keep the price low. On the rear, there are four cameras placed in a square-shaped camera island. Even with an AMOLED panel, the fingerprint scanner is there on the side and not under the display, again, done for the sake of cutting costs.

The star of the show is definitely that display upfront. It is a 6.4-inch Super AMOLED panel with Full-HD+ resolution and a 90Hz refresh rate. On top of that, the brightness can reach 800 nits when the “High Brightness Mode” is enabled. For a price under Rs 15,000, this is now the best display on a phone that you can get. ]

Another highlight of this phone is its massive 6000mAh battery. The same sized battery was there on the Galaxy M31 of last year, and it has become a trademark of the Galaxy M series. In the box, you get a 15W adapter to charge the battery quickly.

Speaking of the cameras, there is a Quad camera setup on the rear that includes a primary 64 Megapixel sensor, an 8 Megapixel 123-degree ultrawide camera, a 2 Megapixel depth sensor, and a 2 Megapixel macro camera. There is a 20 Megapixel camera on the front for selfies.

Performance is perhaps the weakest part of this phone as it has the MediaTek Helio G80 SOC, a chipset usually seen powering phones under Rs 10,000 in India. It is paired with 4GB or 6GB RAM and 64GB or 128GB storage. For comparison, the last year’s Galaxy M31 featured a base variant with 6GB RAM and 64GB storage. Here, the RAM for the base variant gets reduced to 4GB.

The storage is expandable via a microSD card of up to 1 TeraByte. Finally, OneUI 3.1 runs out of the box, which is based on Android 11.

Samsung Galaxy M32 comes in two colors in India – Black and Light Blue. There are two storage options, and the pricing is as follows –

Amazon is also offering a Rs 1,250 discount if you use ICICI Bank Cards for payment, so that brings the starting price down to Rs 13,749. The sale starts on the 28th of June.