Samsung Galaxy A50, A30 & A10 Specifications leaked

Recently, we got to know that soon, Samsung will be launching the 2019’s Galaxy A Series phones in India including the Galaxy A10, A20, and A30. Later, the Galaxy A50 would follow. Today, however, the full spec sheet of each of Samsung Galaxy A50, A30 and A10 leaked via MySmartPrice that shows there is not much difference compared to the Galaxy M10 and M20 when you compare the specs of Galaxy A10 and A30.

READ: Samsung Galaxy A90 will be company’s first phone with pop-up selfie camera 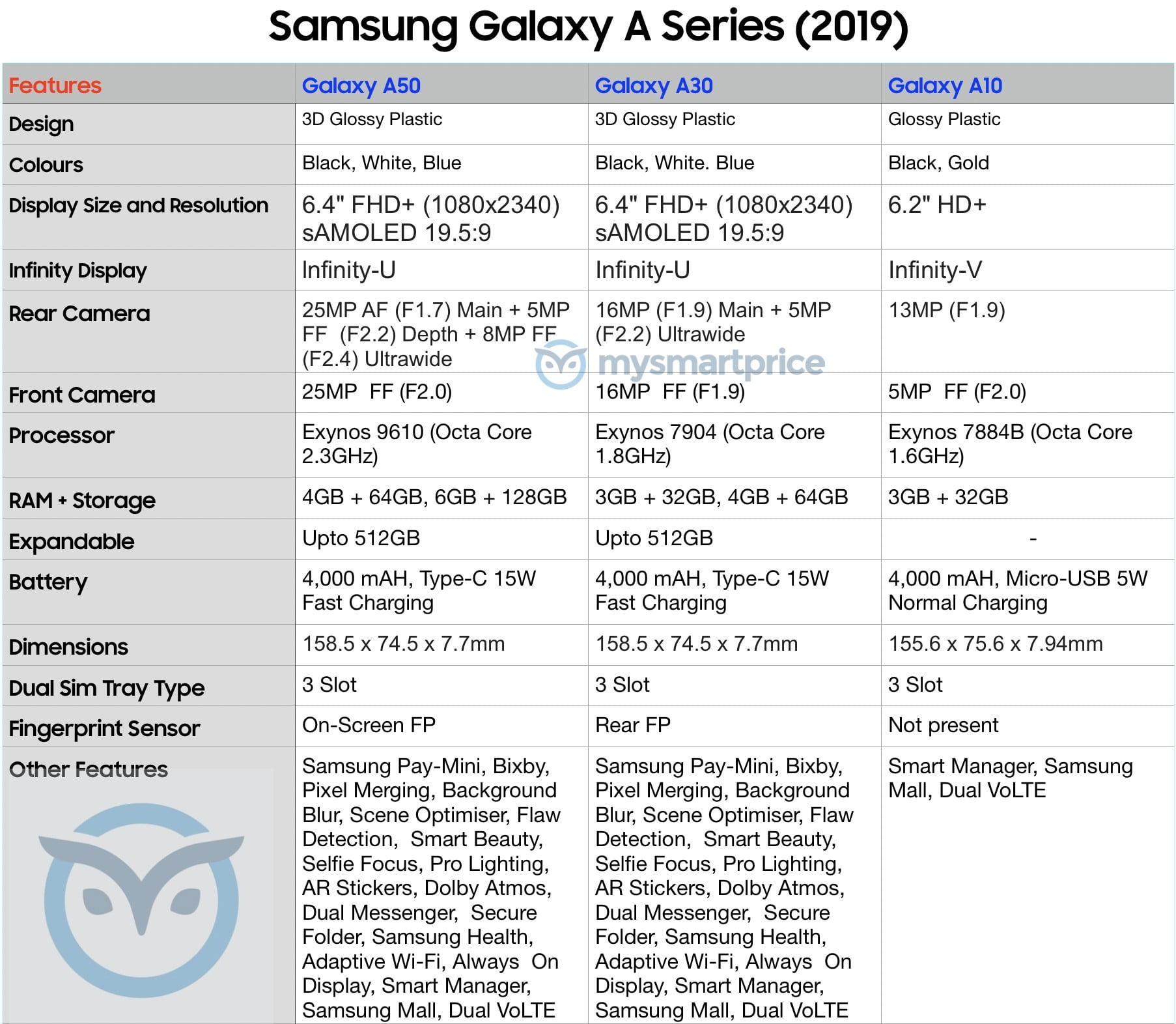 Starting with the Samsung Galaxy A50, it has a 6.4-inch Full-HD+ Super AMOLED display with 19.5:9 aspect ratio and a U-shaped notch on top (Infinity-U display). The phone has 3D Glossy plastic back, so there is no glass back. The processor powering the M50 is the 10nm Exynos 9610 which is an octa-core chip clocked at 2.3GHz and the first 10nm processor in the Exynos 7 series.

The Samsung Galaxy A50 has 4/6GB RAM and 64/128GB internal storage. The storage is expandable up to 512GB. It is also the first Galaxy A series phone to feature an in-display fingerprint scanner. There is a 4,000mAh battery underneath that supports 15W fast charging via the USB Type-C port.

Coming to the cameras, the Galaxy A50 has triple rear cameras that include a primary 25MP f/1.7 camera, a secondary 5MP f/2.2 depth sensor, and a third 8MP f/2.4 ultra-wide angle camera. On the front, the phone has a single 25MP f/2.0 camera. Other features include Dolby ATMOS, AR Stickers, Pro Lighting, Bixby, Scene Optimizer, Flaw Detection, etc.

The color options for the Samsung Galaxy A50 are Black, White, and Blue.

The Samsung Galaxy A30 is similar to the Galaxy M20 in terms of the specifications. There is a 6.4-inch Full-HD+ Super AMOLED display with a 19.5:9 aspect ratio. It is the same Infinity-U display as the Galaxy A50. The octa-core Exynos 7904 processor powers the A30 and there is 3/4GB RAM along with 32/64GB internal storage.

There are dual rear cameras that include a primary 16MP f/1.9 primary camera and a secondary 5MP f/2.2 Ultra wide-angle camera. On the front, the phone has a 16MP f/1.9 sensor. The battery underneath is a 4,000mAh unit that supports 15W fast charging via the USB Type-C port.

It also has 3D Glossy plastic back and the same color options as the A50, i.e., Black, White and Blue. Unlike the Samsung Galaxy A50, the A30 has a fingerprint scanner on the rear. Some other features are Dolby ATMOS, Scene Optimizer, Bixby, Samsung Pay Mini, Flaw Detection, etc.

There is 3GB RAM and 32GB ROM. The battery underneath is a 4,000mAh unit, and there is a micro USB port. There is no fast charging as the phone charges via the normal 5W charger. The Galaxy A10 has a single 13MP f/1.9 camera on the rear and a single 5MP f/2.0 selfie camera. Like the Galaxy M10, the A10 also has no fingerprint scanner. The color options are Black and Gold.

Well, the pricing of these 2019’s A-series phones is not yet known so stay tuned for that.