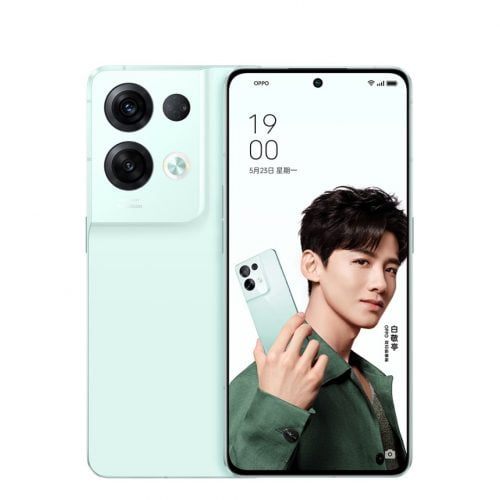 The Reno series by Oppo is known for smartphones with beautiful design & the all-new Reno 8 series is no exception. Oppo follows the half-yearly launch timeline for its Reno series, which means after every 5-6 months, we get a new Reno series. The Reno 7 series launched in November, and now, we have got the Reno 8 series. This time, there are three phones under this series named the Oppo Reno 8, Reno 8 Pro & Reno 8 Pro+, with the pricing in the same order too. Starting with the Reno 8, this is the successor to the Oppo Reno 7 & one of the most notable upgrades comes in the design. The camera module is completely redesigned, and instead of being a separate rectangular module, it is now a part of the back. The phone is also quite slim at 7.67mm & weighs around 179g.

On the front, there is a flat panel with a hole punch in the corner and a pretty big bottom bezel. The fingerprint scanner is present under the display, and there is no 3.5mm headphone jack.

Oppo Reno 8 has a 6.43-inch AMOLED with up to 90Hz refresh rate and 180Hz touch-sampling rate. The panel is protected with Corning Gorilla Glass 5 and has a peak brightness of 800 nits. Under the hood, there is the MediaTek Dimensity 1300 SOC which is the same chipset that powers the recently launched OnePlus NORD 2T.

The camera setup on the back includes a 50MP primary sensor, a 2MP monochrome sensor & a 2MP macro sensor. For selfies, there is a 32MP Sony IMX709 sensor. The battery size is 4,500mAh, and there is support for 80W fast charging. Finally, Android 12 runs out of the box, with ColorOS 12.1 on top.

Comparing this phone to the OnePlus NORD 2T, you’ll find a lot of similarities. For example, the same display, same battery size, same chip, same primary rear camera, same selfie camera, & the same charging speed. In short, these two phones are almost the same, with the only difference being the rear design and an ultrawide camera on the Nord 2T.

Coming to the pricing, Oppo Reno 8 comes in three colors and here is the price for China – Next up, we have the Reno 8 Pro, which is the successor to the Reno 7 Pro. Design-wise, it is identical to the vanilla Reno 8 with some minor differences, such as a thinner bottom bezel on the front and an aviation-grade metal frame. The main difference comes in the specifications.

First and foremost, Reno 8 Pro is powered by the newest Snapdragon 7 Gen 1 SOC. It was unveiled recently by Qualcomm alongside its flagship Snapdragon 8+ Gen 1 SOC. This SOC is based on the 4nm process and offers a significant performance boost over the previous Snapdragon 700 series SOCs. The phone also has Oppo’s MariSiliconX NPU. The triple camera setup on the rear includes a 50MP Sony IMX766 sensor, an 8MP ultrawide & a 2MP macro. There is no OIS for the primary camera. The selfie camera has a 32MP Sony IMX709 sensor. The battery size is 4,500mAh, and there is support for 80W fast charging. The display on the front is a 6.62-inch 120Hz E4 AMOLED with 1300 nits peak brightness and Gorilla Glass 5 protection.

Here is the pricing – Finally, we have the most expensive phone in this series, the Oppo Reno 8 Pro+. Design-wise, even this one looks identical to the other two phones. One major difference is that the hole punch cutout is present in the middle instead of in the corner. This is also a pretty slim phone at 7.34mm and weighs 183g.

The performance gets a boost over the Oppo Reno 8 Pro, thanks to the MediaTek Dimensity 8100-MAX SOC. This is the same chip that powers the OnePlus Ace / 10R. It is paired with LPDDR5 RAM and UFS 3.1 storage. The phone also has MariSiliconX NPU.

The display on the front is a 6.7-inch 120Hz 10-bit AMOLED with Gorilla Glass 5 protection and 950 nits peak brightness. The fingerprint scanner is present under the display.

There are three cameras on the back, and interestingly, the camera setup is the same as Oppo Reno 8 Pro. So, there is a 50MP Sony IMX766 sensor for the primary camera, an 8MP sensor for the ultrawide, and a 2MP sensor for the macro camera. The selfie camera has a 32MP Sony IMX709 sensor. There is no OIS, and the video recording is limited to 4K 30fps.