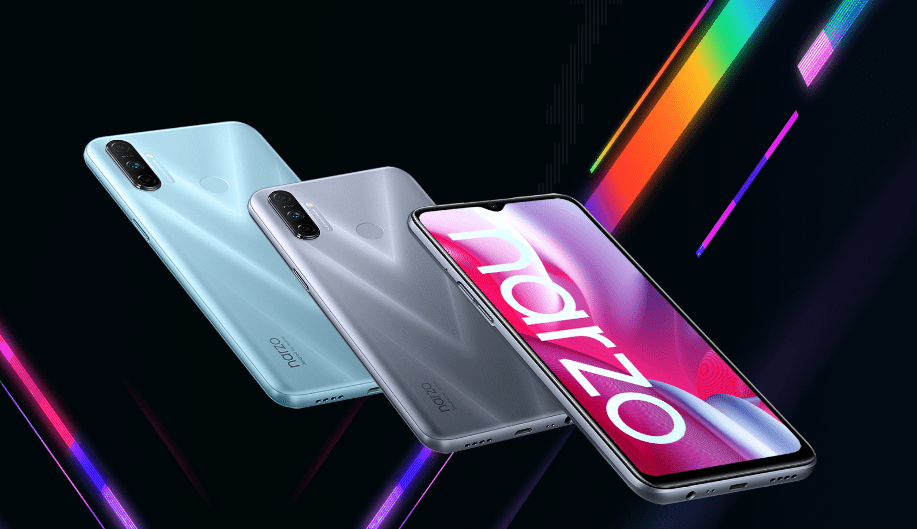 Talking about the design first, Narzo 20A has what Realme calls a “Victory Design” & it is named so because the rear panel makes a “V” shaped pattern when light falls on it. There are triple cameras on the rear & the fingerprint scanner is also on the back. On the bottom, the phone has a micro-USB port paired with a 3.5mm headphone jack & the speaker grill.

The display on the front is a 6.5-inch 720p LCD & under the hood, there is the Qualcomm Snapdragon 665 SOC paired with 3/4GB RAM & 32/64GB internal storage. For memory expansion, the phone comes with a dedicated microSD card slot. 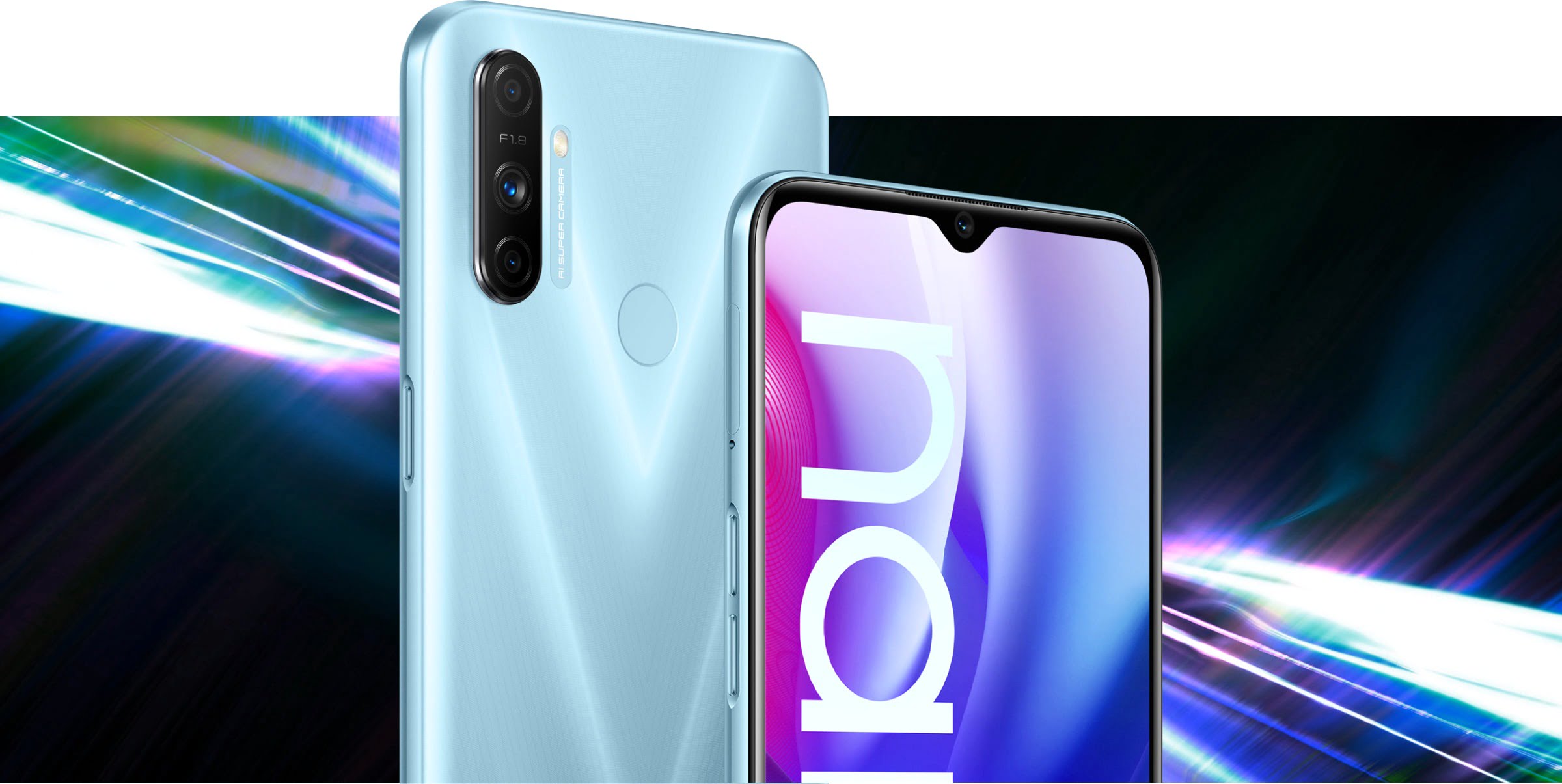 There are triple cameras on the rear that include a primary 12 Megapixel sensor with f/1.8 aperture lens, a secondary B&W Lens, & a third Retro Lens. The primary camera can shoot up to 4K 30fps videos. On the front, the Narzo 20A has an 8 Megapixel camera. There is a 5,000mAh battery along with 10W Charging.

Narzo 20A comes in two colors named Victory Blue & Glory Silver. There are two storage options & here is the pricing –

The first sale is happening on the 30th of September & you can buy it via Flipkart, Realme.com or the Offline Stores. 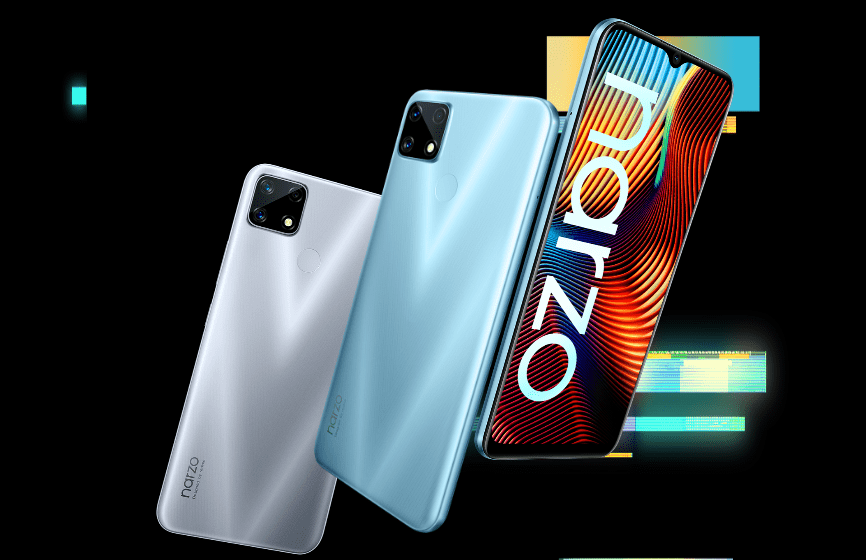 Design wise, the Narzo 20 looks very similar to the Realme C12 since there is a square-shaped triple camera setup on the rear along with the fingerprint scanner & a waterdrop notch on the front. It has a USB Type-C port on the bottom along with the 3.5mm headphone jack & the speaker grill.

The display on the front is a 6.5-inch HD+ LCD & under the hood, there is the MediaTek Helio G85 chipset paired with 4GB RAM & either 64GB or 128GB internal storage. Just like the Narzo 20A, there is a triple card slot for memory expansion.

The triple camera setup on the back includes a primary 48 Megapixel sensor with a f/1.8 aperture lens, a secondary 8 Megapixel ultra-wide-angle camera, & a third 4cm Macro lens. There is support for up to 1080p 60fps video recording. On the front, there is an 8 Megapixel camera for selfies.

Finally, there is a massive 6,000mAh battery underneath along with 18W Fast Charging.

The first sale takes placed on the 28th of September & you can buy it via Flipkart, Realme.com or the offline Realme stores. 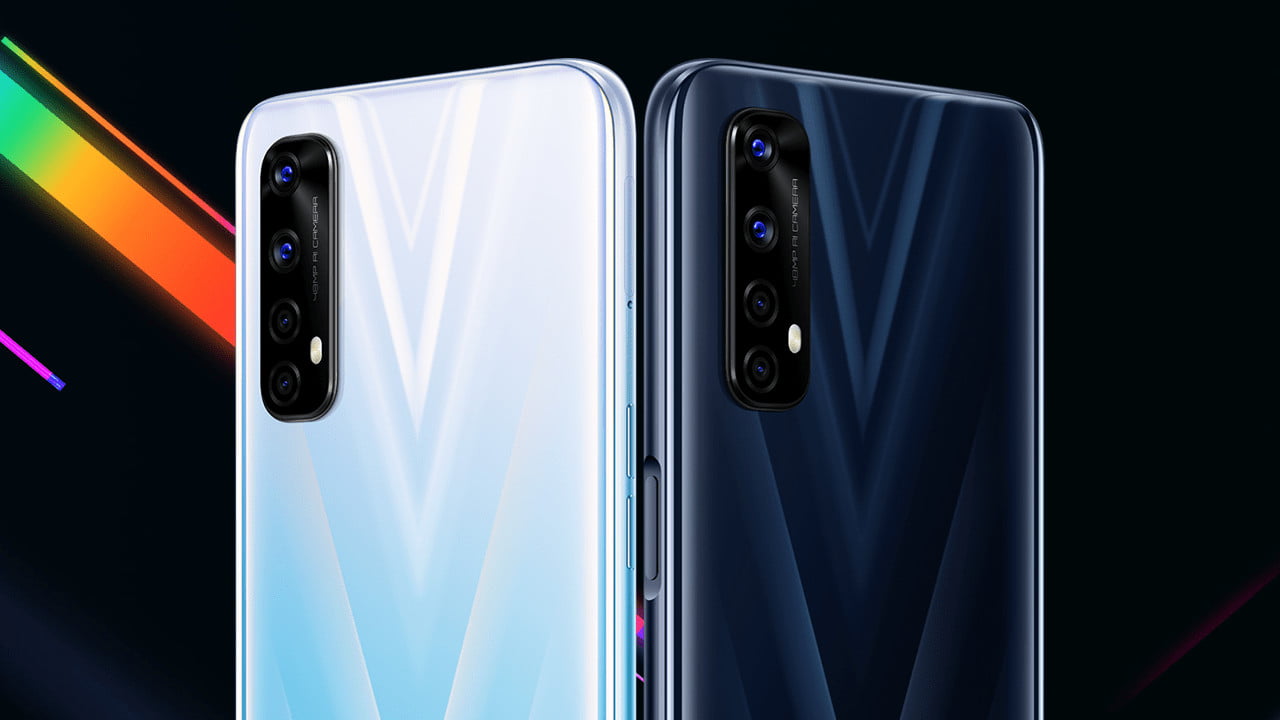 The Narzo 20 Pro is the most expensive phone under the Narzo 20 Series & also the most feature-packed. It has the same “Victory Design” as the Narzo 20A & on the rear, there are Quad cameras. The fingerprint scanner is moved to the right side & on the front, there is a hole-punch design.

The display on the front is a 6.5-inch Full-HD+ LCD with 90Hz refresh rate & Corning Gorilla Glass protection. Under the hood, there is the MediaTek Helio G95 chipset paired with 6GB/8GB RAM & 64GB/128GB internal storage. There is a triple card slot so you can expand the storage via a microSD card & also add two SIM cards at the same time. 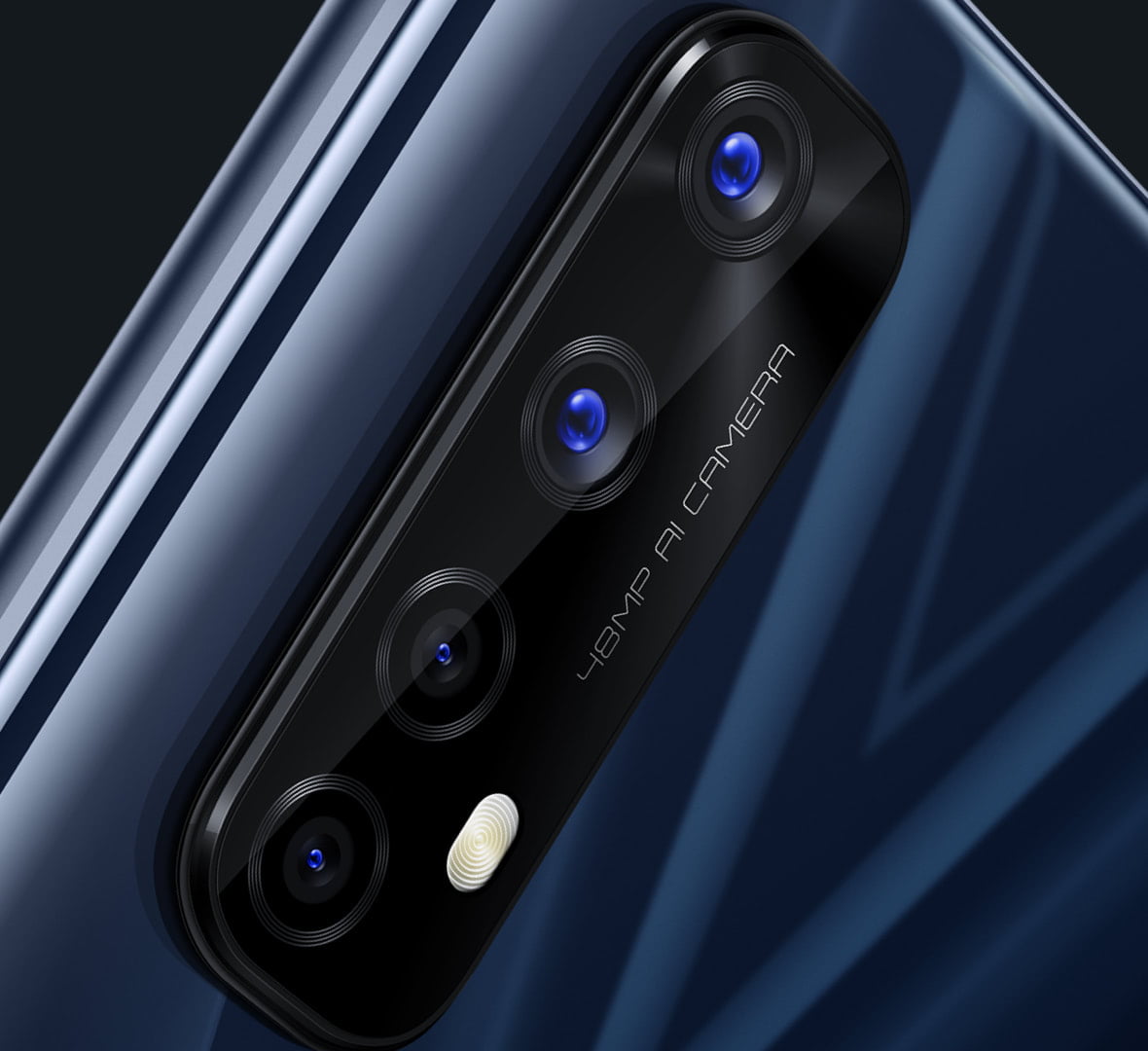 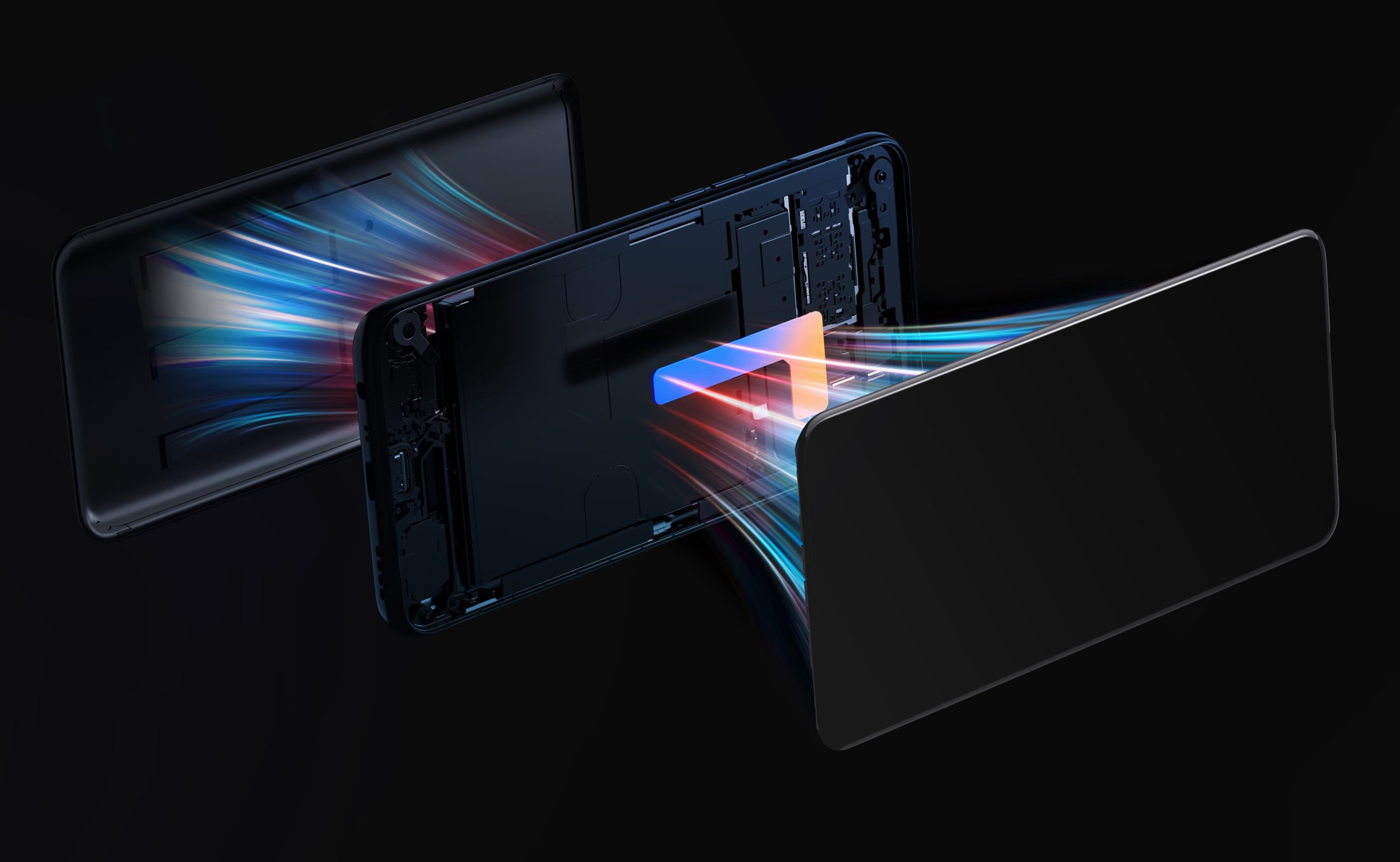 The phone also comes with a Carbon Fiber Cooling System for better cooling while playing games or doing heavy tasks.

The star of the show of the 65W SuperDart Charging which makes Narzo 20 Pro the cheapest phone with 65W Charging. Also, you will get the 65W Adapter in the box. 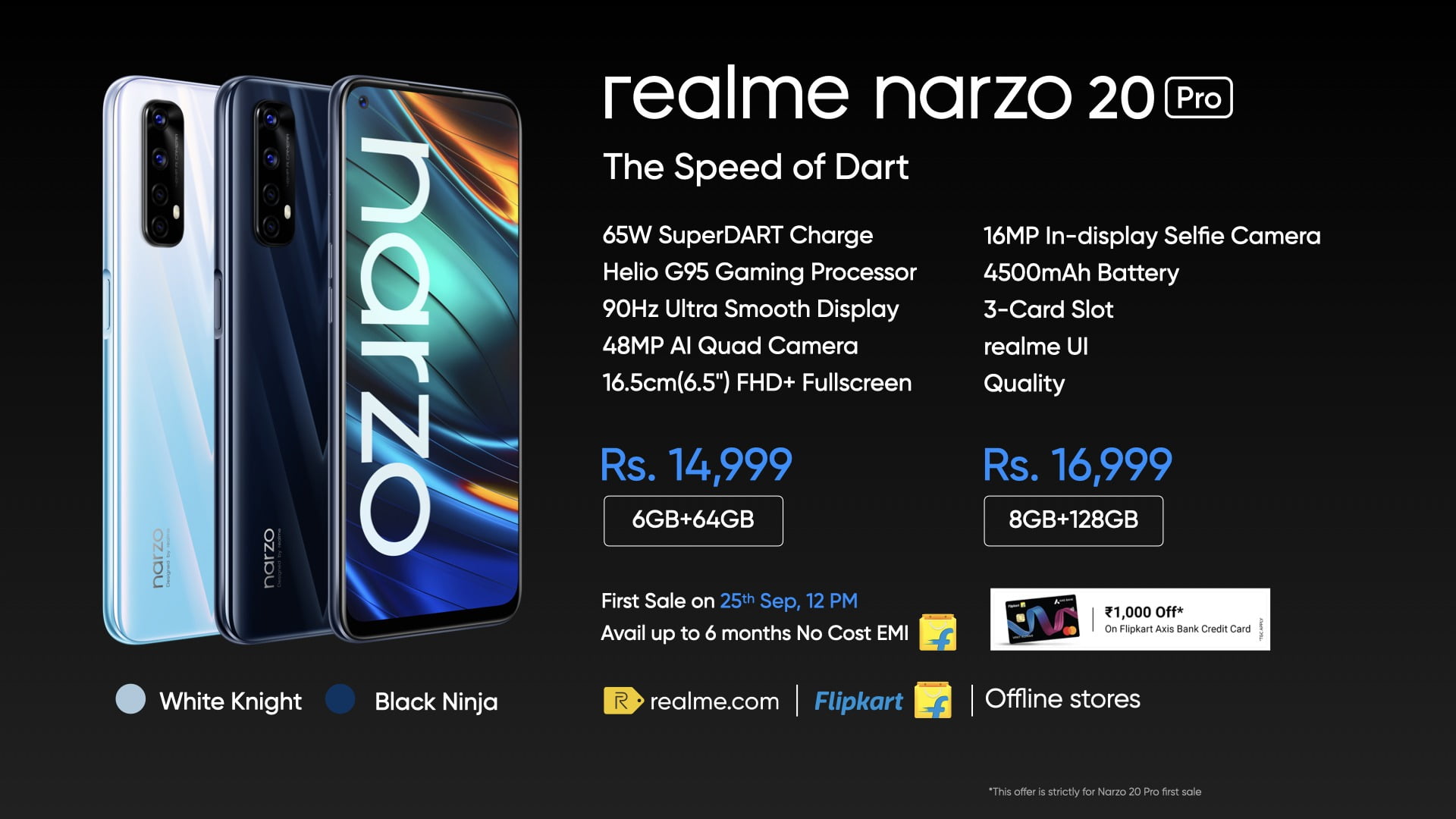 Finally, talking about the pricing, the Narzo 20 Pro comes in two colors named White Knight & Black Ninja. There are two storage options & here is the pricing –

The first sale is taking place on the 25th of September & you can buy the Narzo 20 Pro via Realme.com, Flipkart or the offline stores.