These are the newest offerings under the Edge lineup!

Motorola will soon be launching some new phones under its “Edge” lineup, and so far, the leak & rumours point towards at least three devices – Motorola Edge 20, Edge 20 Lite & Edge 20 Pro. Recently, two of these three phones were certified by TENAA, and the listings reveal the designs as well as the key specifications of these phones. They are believed to be the Edge 20 & Edge 20 Pro.

To begin with, the supposed Motorola Edge 20 bears the model number XT2143-1 as per TENAA & it comes with a big camera module on the back having three cameras. Looking at the image showing the side of this phone, we can see how big the camera module is. The back seems to be made out of glass & there are flat sides. We can also read the “108MP” text on the camera module, which explains the reason for the camera module’s huge size.

As per TENAA, the phone has an octa-core CPU clocked at 2.4GHz, and if previous leaks are to be believed, this is the Qualcomm Snapdragon 778G.

The Motorola Edge 20 Pro is going to be the high-end flagship phone under the “Edge 20” series & design-wise, it is mostly the same as the Edge 20 except for the fact that the camera module on the back includes a periscope camera for zoom shots. The TENAA listing mentions a 3.2GHz octa-core CPU which is definitely the Qualcomm Snapdragon 870. It is worth mentioning that it is not the first time Motorola went with this chip. In fact, the Motorola Edge S, which launched in January this year, was the first phone to launch with Snapdragon 870.

Evan Blass, who is perhaps one of the most trusted sources for tech leaks, has already shared the key specifications of the phones under this lineup. His tweet didn’t include the actual names of the phones but rather the codenames. So, looking at the above image, the phone codenamed “PSTAR” is the Motorola Edge 20 Pro as it is the only phone having Snapdragon 870. Other specifications that are mentioned include a 6.67-inch Full-HD+ OLED with a 120Hz refresh rate and a centered hole-punch, an in-display fingerprint scanner, a 4,500mAh battery, 108MP + 16MP (wide+macro) + 8MP 5X triple camera setup, and a 16 Megapixel selfie camera (32MP for global markets).

There is a single speaker, a dedicated Google Assistant button & three color options – Black, White & Blue. The markets it is coming to include Asia, Europe, Australia, Latin America, and India.

There are two phones with Snapdragon 778G in the above image, both having the codename “BERLIN.” But while one is for the global market, the other one is for North America. Talking about the differences between the two, the North American variant has a larger 6.78-inch display vs. 6.67-inch, an 8 Megapixel wide/macro camera instead of 16MP, a 2 Megapixel depth sensor instead of an 8 Megapixel telephoto & a 5,000mAh battery instead of 4,000mAh. Both the variants have a mono speaker, but the Google Assistant button is there on only the global variant of Motorola Edge 20.

The Motorola Edge Lite is codenamed “KYOTO” and has a 90Hz display, MediaTek Dimensity 720 5G chipset, a 5,000mAh battery, 108MP camera on the rear & a 32 Megapixel selfie camera. So it is interesting that Motorola went for a 108 Megapixel sensor on all its Edge 20 series phones. 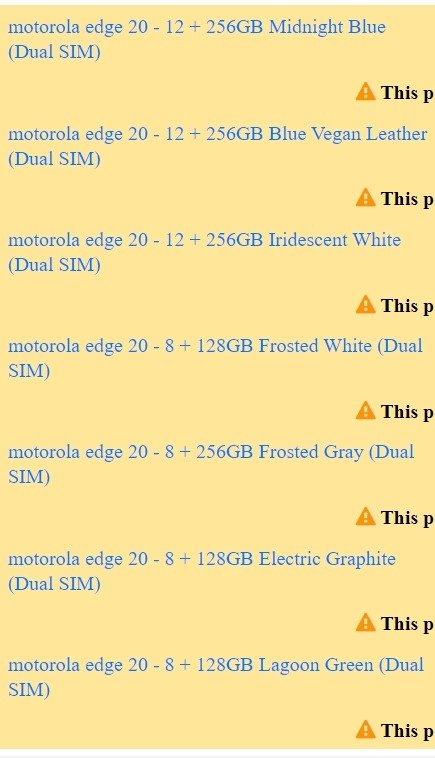 In one other Tweet, Evan Blass also revealed that the Motorola Edge 20 comes in not three or four or five, but rather seven different color options. These are Midnight Blue, Blue Vegan Leather, Iridescent White, Frosted White, Frosted Gray, Electric Graphite & Lagoon Green.

These phones are set to launch at the end of this month, but there is still no official word from Motorola.