On May 18th, MediaTek will launch a new 5G SOC in China & many have speculated it to be the MediaTek Dimensity 820. Redmi Lu Weibing, the General Manager of Redmi, reposted the post by MediaTek on his Weibo profile which suggests Redmi would be the first to launch a device with this SOC.

Well, an upcoming 5G phone from Redmi showed up on TENAA today with the model number M2004J7AC and it cold very likely be the device powered by the upcoming 5G SOC from MediaTek. As per Xiaomishka on Twitter, this is the Redmi Note 10 which is interesting since the Redmi Note 9 series launched just a couple of months ago in India.

Well, launching it as Redmi Note 10 isn’t very surprising because Redmi hasn’t yet launched Note 9 series in China. So, to compete with the likes of Honor X10, Redmi might have decided to launch the Note 10.

Anyways, the TENAA listing reveals that the design is similar to the Redmi Note 9 series except for one major change. There is not a punch-hole design on the front but rather a U-shaped notch that houses the single selfie camera. In case you’re wondering why, then Digital Chat Station, a very reliable Weibo source, revealed that there is an OLED panel with an in-screen fingerprint scanner.

This means, the Redmi Note 10 (or whatever this device is named) is going to be the first Redmi Note with an OLED panel since until now, we have seen LCD panels on the Note series devices. 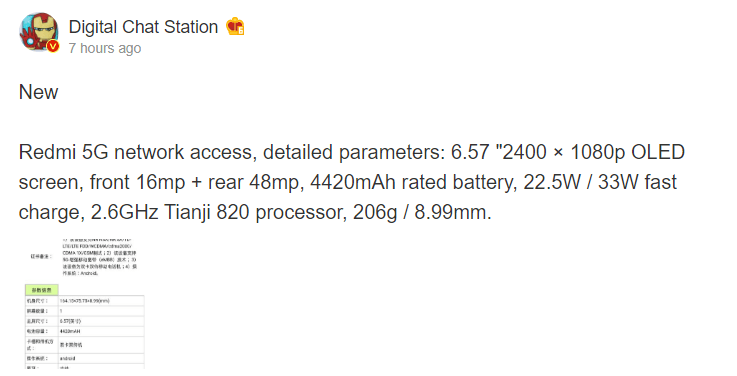 Digital Chat Station also revealed that the SOC powering this device is the MediaTek Dimensity 820 having a CPU clocked at 2.6GHz. So, the speculations regarding the launch of Dimensity 820 SOC on May 18th in China are most likely correct.

Well, there are chances that Alleged Redmi Note 10 launches the same day when the Dimensity 820 is unveiled, but that